From the RuneScape Wiki, the wiki for all things RuneScape
Jump to navigation Jump to search
For the Summoning familiar, see Abyssal parasite.

Tuska parasites were parasites that lived on Tuska's back and could be slain during the Tuska Comes world event. They gave Slayer experience once killed. They became immune to attacks when the event began, until 20 minutes later. 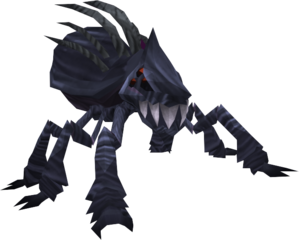 As part of the pre-release teaser, they occasionally spawned on 24 May as Strange insects around the crashed rock south of the Barbarian Village. These insects would always drop meteor shards when killed.

This information has been compiled as part of the update history project. Some updates may not be included - see here for how to help out!
Retrieved from ‘https://runescape.wiki/w/Parasite?oldid=35791944’
Categories:
Hidden categories: