Warpriest of Tuska armour is a set of hybrid armour that can be bought from the Anima Islands reward shop. The full armour set costs 13,000 Reward Currency.

When initially purchased, the armour starts at tier 25. Equipping the armour with a Defence level of 50 or higher results in the following message: The armour adapts to suit your current abilities. and upgrades the armour to tier 50 or 75 based on Defence level. When logging into a free-to-play world, the armour will revert to its tier 50 variant.

The armour's set effect adds a 1% chance per piece worn to deal a critical hit (95–100% damage for that attack) against enemies in combat. Wearing at least 3 pieces is required to gain this set effect, similar to how the other warpriest armour sets function. When the effect activates, a blue column of light appears over the target, and the following message appears in the chat box: You channel the power of the beast and deal a critical strike!

The set effect does not stack with the Biting perk. Additionally, the set effect takes priority over the perk, regardless of which effect is greater. 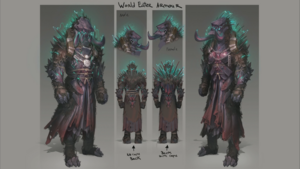