A male player wearing the warpriest of Saradomin armour

A female player wearing the warpriest of Saradomin armour

Warpriest of Saradomin armour is a set of hybrid armour originally obtained during the Battle of Lumbridge world event at a cost of 20,500 renown. Players can now receive parts of the armour by killing Saradominist followers in the God Wars Dungeon. It could also be bought during the Tuska Comes world event.

If a player is wearing at least three pieces of warpriest armour when damaged, there's a chance that damage would be reduced.

When the Passive effect occurs, the following message appears: 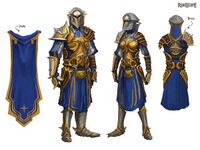