Fern was Elora the Lifegiver's sister and the mate of Bree.

Fern was Elora's sister. The centaurs sided with Saradomin during the Gielinorian God Wars, but as they fought, their numbers began dwindling to dangerous numbers. Her mate, Bree, suggested they abandon Saradomin and return home, but Fern insisted on continuing the fight.

According to Fern, Elora was born with a special gift: the ability to heal and restore life to the dead or dying through the use of a special horn that had grown due to her acts of kindness.[1] This power, however, came at a cost: whenever Elora used her powers it drained life from her. As Fern continued to ask Elora to heal the wounded, she lost the ability to move, became frail, exhausted, and eventually died.[2]

Fern still needed to heal the wounded, however, and cut the horn from Elora's head, turning it into the Wand of Resurrection.[3] The corrupted centaurs slaughtered the rest of the herd, saving Fern for last.

The Guardian of the Wand[edit | edit source]

Instead of dying and passing on, Fern was instead turned into the guardian for the Wand of Resurrection. The wand was kept in a Saradominist burial ground in the far north to bury the loyal followers of Saradomin who died in the wars. Fern had three trials before anyone could claim the wand - they had to best her in combat as the first trial, solve a simple puzzle as the second and to be virtuous enough to give up their blood and breach the barrier.

The following takes place during The Death of Chivalry.

Around Year 1 of the Sixth Age, Lord Daquarius sent the witch Lensig to find and claim the Wand of Resurrection to overcome Saradomin's forces. Lensig did this by killing Captain Dulcin, the overseer of the Black Knight's Fortress, who Daquarius wanted dead as he could no longer tolerate his hostile stances. Masquerading as the former captain, Lensig managed to find the Saradominist burial ground and sent several Black Knights to claim the wand. Fern naturally appeared to defend it, killing a few knights, but was ultimately defeated. Lensig also had some captured Saradominist priests and sisters give up their blood to breach the ward, but because it was given involuntarily, they were rejected and killed. She then opted to wait for someone who could.

This would come in the form of the World Guardian and Sir Owen, who encountered Fern and defeated her. Either one then breached the ward with their own blood, allowing it to be safely claimed. Lensig then confronted them, killing Owen, but was then killed by the World Guardian. Saradomin, sensing his most faithful killed, used the Wand to resurrect him, successfully doing so, but because he acted on impulse, accidentally corrupted him in the process. Depending on the choices made by the World Guardian, Fern ultimately agreed to watch Owen's corruption, stating that she would not hesitate to destroy him if it overwhelmed him. The group then began making plans to head to the centaur burial grounds.

Owen was able to control his corruption and asked Fern about the burial ground. Fern stated that there was no burial ground, as the centaurs used their dead for hides, bones and even food. Instead, the "burial ground" was a location in the northern shores of the Wilderness where the living centaurs had been slain by their undead brethren when Fern used the Wand to resurrect them.

Saradomin teleported himself and Owen there; Fern, being the Wand's guardian, was also in attendance. As soon as Fern appeared, the undead centaurs rose from the ocean and attacked the group. Believing them to be soulless creatures, Saradomin ordered Fern to check their spectral forms and detail them. Fern complied and was surprised to see that the necrotaurs were soul-bound creatures, having accumulated the souls of the living they had killed. The two then realized that the necrotaurs were bound to Fern's regrets and fears, and Saradomin ordered her to destroy their spectral forms to grant them the peace they deserved. 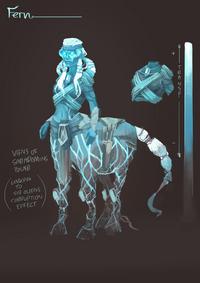