From the RuneScape Wiki, the wiki for all things RuneScape
Jump to navigation Jump to search
The Old School RuneScape Wiki also has an article on: osrsw:Enchanted Valley 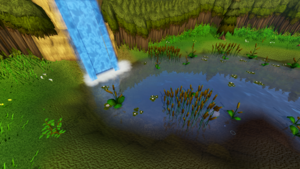 The Enchanted Valley (also commonly known as Centaur Valley or Enchanted Forest) is a small, hidden place only accessible by the use of the fairy ring transportation system with code BKQ. When the player appears in the valley, they will be standing behind a waterfall. The waterfall has a steep incline which can be walked down into the valley. The world is a shard of Renmark. It was found by Saradomin some time after Renmark shattered.

It contains the Wood Dryad and centaurs, alongside attackable rabbits, and the creature unique to the Enchanted Valley, the stag. The trees resemble Arctic pine trees. The entire area is surrounded by what appears to be a very thick concentration of these trees, however, these trees do not have leaves covering the whole trunk and they somewhat resemble maple trees with arctic pine branches. A river, fed by the waterfall, leads to the south-east towards an unexplorable region. The side of the river is covered in thick reeds. Around to the other side of the river, opposite the waterfall, the Frog Prince and Frog Princess, along with the Frog Herald, can be found "froggymooning".

If a player chops a tree here, a tree spirit will always attack. In addition, the former rock golem and river troll random events reside here. Players can "activate" them by mining, prospecting or fishing in the respective areas. The tree spirit is level 12, and the rock golem and river trolls do not have a level, but still can be attacked. The rocks contain an unknown substance, as prospecting them or mining them will yield no message in the text box and a rock golem attack. Fighting rock golems or river trolls yields no experience.

The player must visit the Valley during the quest A Fairy Tale III - Battle at Ork's Rift, where General Gromblod has taken up temporary residence in the search for a special kind of mango. This ork disappears after quest completion. Before this quest, the valley had little use other than those who enjoy the serenity or look for nostalgia fighting retired random event monsters. The mysterious wood dryads and the Stag do not exist anywhere else in the game.

The only way to access the Enchanted Valley is with the fairy ring BKQ. If A Fairy Tale III - Battle at Ork's Rift has not been completed, either a Dramen staff or a Lunar staff must be equipped.