The Armadyl godsword is one of the four legendary godswords that was fought over during the God Wars. Requiring 75 Attack to wield, it is created by attaching an Armadyl hilt to a completed godsword blade, which has no requirements and can be done by any player. 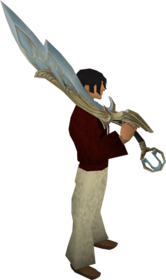 The Armadyl godsword has either a special attack or a passive effect, of which only one can be active at a time. The player can switch between the two by using the godsword on the Armadyl altar in the God Wars Dungeon in the room where Kree'arra and his minions are, however entering Armadyl's Eyrie requires 70 Ranged.

The Armadyl godsword (passive) is made by using the godsword on the Armadyl altar in Kree'arra's room in the God Wars Dungeon. This makes the godsword untradeable, loses its special attack, but gives it a passive effect that has a 25% chance of activating upon a successful hit: it raises the wielder's Attack and Strength levels by 1 each time, for up to 10% of the wielder's levels. However this passive is fairly unpopular as the boost does not stack with potions and so does not provide any damage boosts, unlike the special attack.