Quick guide for Do No Evil

From the RuneScape Wiki, the wiki for all things RuneScape
< Do No Evil
Jump to: navigation, search

v • d • e
Do No Evil
Items needed: Any monkey greegree, a monkeyspeak amulet, at least 10 coins, and some free inventory spots. (20+ to make it easy in one try)

Items needed: Ring of Charos, Ava's accumulator, Monkeyspeak amulet, monkey greegree, a spade, barrel of monkeys, a weapon to kill low-level enemies -- if you have a gembag and wear the desert clothing set bellow you can bring the items from the next section to avoid bank travel.
The location for the new monkey colony 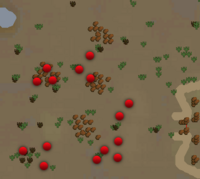 The locations of the crates

Items needed: masked earmuffs or a slayer helmet, a cramulet and combat gear.

For information on how to defeat this boss, click here.

Items needed: 2 ropes if you have never entered the Kalphite Queen's lair, a cramulet and combat gear

For information how to defeat this boss, click here.

For information on how to defeat this boss, click here. 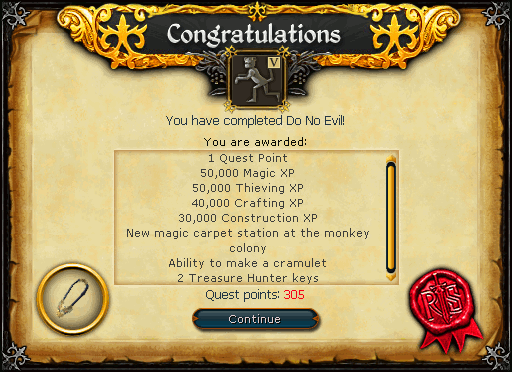 The entrance to the Apmeken tomb.

Do No Evil is directly required for the following quests/miniquests:

It is therefore an indirect requirement for the following quests and miniquests:
Retrieved from ‘https://runescape.wiki/w/Do_No_Evil/Quick_guide?oldid=35572309’
Categories:
Hidden categories: