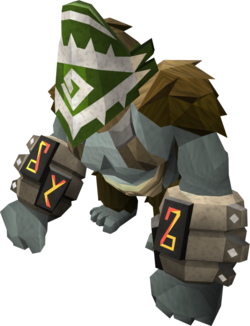 Ayuni is one of the three bosses encountered in quest Do No Evil and was created by Amascut, using Apmeken's stolen sight.

Ayuni is fight-able along with her sisters Eruni and Leeuni as a class A boss monster in the Dominion Tower minigame if the player has completed Do No Evil.

It is important to not underestimate Ayuni, as her low combat level is deceiving. Ayuni's main strength is her melee attack, which is strong and hits very fast and accurately. Like her sisters, Leeuni and Eruni, she is impervious to the effects of poison.

She also moves at half the speed of walking, which further encourages defeating this opponent with Ranged or Magic. However, running too far from her will cause her to launch very powerful projectile attacks that hit in the 2000s.

Ayuni is capable of draining the player's Prayer by up to 250 points per attack using her magic and melee attacks. However, this is greatly reduced in the Dominion Tower. Using hit and run methods while ranging Ayuni makes this fight easy even without prayer.

When Ayuni's health drops lower, she begins to use teleports to momentarily catch up with you.