From the RuneScape Wiki, the wiki for all things RuneScape
Jump to navigation Jump to search
The Old School RuneScape Wiki also has an article on: osrsw:Eagles' Peak
This article is about the quest. For other uses, see Eagles' Peak (disambiguation).
"EP" redirects here. For the old PvP/Bounty Hunter feature, see earning potential.

Eagles' Peak is a quest based on the Hunter skill, where the player helps the Ardougne Zoo procure a ferret as a new attraction. Rewards for the quest includes a new way to train the Hunter skill and a new form of transportation.

Talk to Charlie the zoo keeper at Ardougne Zoo. He is at the south-west part of the zoo, just south of the scorpion cage. Select the option, "Ah, you sound like someone who needs a quest doing!" He'll tell you about his problem with a new delivery, a northern ferret, who managed to escape his cage while it was being unloaded. Charlie then contracted a huntsman called Nickolaus, who agreed to capture another ferret, but he hasn't been heard from for some time. Charlie will ask you to look for him. Select, "Sure. Any idea where I should start looking?" Charlie will then tell you to start around the mountains just west of the Tree Gnome Stronghold. 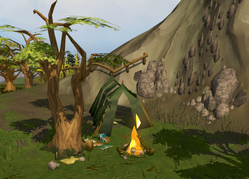 The easiest way to get here is to home teleport to the Eagles' Peak lodestone; if you have it activated. If you have access to the fairy ring network, the code AKQ lands you near the Piscatoris Fishing Colony, and travel south from there. You can also teleport to Het's Oasis with a ring of duelling and travel using the gnome glider to the Tree Gnome Stronghold after The Grand Tree, or you can simply use the Book of Char's teleport option and run north to the tent. If you have started the Memorial to Guthix distraction and diversion, you can use your memory strands to teleport just north of the campsite, making this the fastest travel method possible.

Go to the north west side of the mountain's base, where you will see a campsite. Inspect the pile of books to find a Bird book, then click on it to retrieve the metal feather. From here, climb up the rocks next to the campsite to reach the rocky outcrop at the top of the mountain.

Use the metal feather from the book on the rocky outcrop to open the door. Then, go inside. A Feathered journal is just inside, but though amusing, it is not critical to the quest.

The passages split to three tunnels to other areas and another metal door, used later, and to a ledge over a large open area. First, walk towards Nickolaus. A cutscene will start when you enter the ledge and you will talk to Nickolaus, who is trapped across a chasm by a Giant Eagle that will not let him out of the cave. If you accidentally skip the cutscene by clicking to walk, or by other means, you can click on Nickolaus to shout at him, ultimately talking to him. While you are in the dungeon pick up 10 giant feathers (named Eagle feathers in the inventory) for use later. 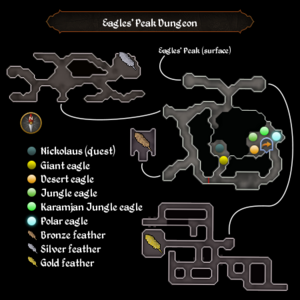 Nickolaus tells you to make a disguise for him. Talk to him about eagles, mention that he is trapped and offer to help. To make the disguises, you'll need 10 giant eagle feathers, which are all over the dungeon, in addition to 1 swamp tar and 1 yellow dye.

Teleport to Varrock and go to the Fancy Clothes Store (not the costume/clothing shop at the centre of Varrock) located in the south-east corner of the city, past the fenced gate and to the east of a bar. The shop owner wants 10 giant feathers to make the costumes plus 1 swamp tar and 1 yellow dye. 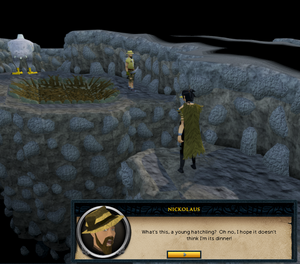 A player shouting at Nickolaus.

When you bring all the items (10 giant eagle feathers, 1 swamp tar, 1 yellow dye) and additional 50 coins, the Fancy-dress shop owner will make two eagle capes and two fake beaks. If you happen to lose your costume, the Fancy dress shop owner will make you another if you bring him the materials and 25 coins. With the two sets of disguises, go back to the Eagles' Peak mountain again. Go back up the shortcut and talk to Nickolaus. He wants you to bring the clothes to him. 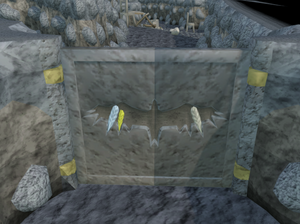 There is a door in the dungeon with a large Eagle marking that leads to Nickolaus. You cannot open the door in this state. Three feathers (a bronze feather, a silver feather, and a golden feather) are required to be able to open the door.

West of the Eagle door is a tunnel. This leads to a room with a stone pedestal on which sits a bronze feather. When a player attempts to take it, a net trap will lift it upwards. Only once the net trap is holding the pedestal out of reach it is possible to operate the winches. Operate all four winches in each of the corners, causing the net trap to break. The pedestal will fall down and it is possible to take the bronze feather. After that leave and follow the directions to the silver feather cave. 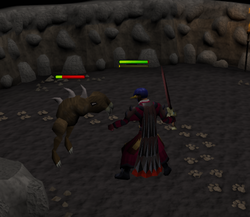 A bit further north, a second tunnel leads into another dungeon room, this time with an empty pedestal. Inspect the pedestal and a partial trail will appear. Follow the trail and inspect the closest heap of rocks to the end of the trail. If you are correct, the trail from the pedestal is shown to the heap of rocks, and a new partial trail starts. Repeat until the trail leads to an opening in the wall. Click the tunnel in the wall now and a level 14 kebbit will attack. Once you've killed it, take the silver feather by clicking the opening again and put it in the door. (Using ring of recoil to kill it works without getting any combat experience.)

The third tunnel entrance is to the east of the main dungeon (opposite where you first entered the cave system). You need to get to the end of a long corridor due west from the entrance. The corridor is blocked by metal Eagles on tracks and Eagle-winged gates. The birds can be lured to a feeder by putting odd bird seed in a feeder along the track while the gates are opened and closed using levers in the area.

There is a reset lever outside of the Gold Feather cave.

After collecting all three feathers (bronze, silver and gold) use each feather on the door to open it. Walk to Nickolaus by clicking on the Giant Eagle while wearing the full Eagle disguise. If you are not wearing a disguise, the eagle will knock you back dealing 0-100 life points.

After a short conversation, Nickolaus requests you to meet him back at the camp. 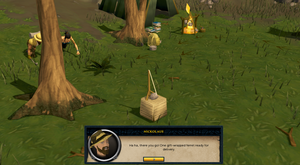 Catching the Ferret for the Zoo.

Go back out of the Eagle Peak Mountain dungeon and walk back down to the tent you were at before (or take the rock climbing short-cut). Talk to Nickolaus and he'll teach you how to catch Ferrets. Go back to Ardougne zoo with a caught Ferret and talk to Charlie and quest complete! 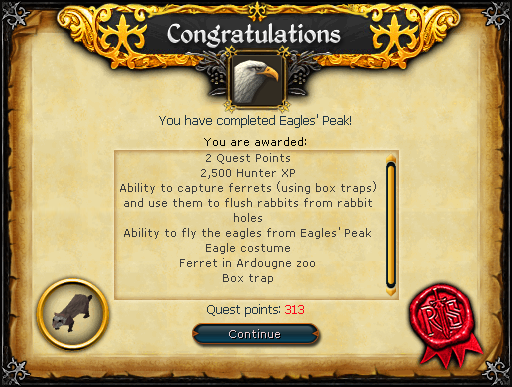 Eagles' Peak is not currently required for any quests or miniquests.