The portal out of the demon's lair.

Thammaron's Throne Room is discovered in The Golem quest. It is visited again in Shadow of the Storm and Do No Evil. It is likely to be part of the Infernal Dimensions, but players cannot venture further into the realm.

During The Golem, the player discovers the only portal to the throne room under the ruins of Uzer. The Elder Demon found in Uzer to make it believe its task of slaying the demon is complete. 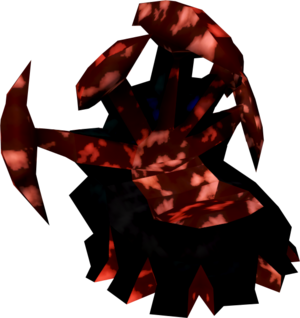 During Shadow of the Storm, the player infiltrates a demon-summoning group only to discover Denath, a member, is actually the demon Agrith Naar and tricked them into de-summoning him back into the Infernal Dimensions where he would be more powerful. The player regroups the rest of the team, recruits several more unlikely people, and finally defeats him after re-summoning him into Gielinor.

During Do No Evil, Eruni, a demonic ape capable of summoning lesser demons created by Amascut with Apmeken's stolen hearing, resides in this realm, but the player finds and defeats her.

After The Golem, the player can use a chisel on Thammaron's throne to get six gems - 2 rubies, 2 emeralds, and 2 sapphires. (Toolbelt works.)

This information has been compiled as part of the update history project. Some updates may not be included - see here for how to help out!
Retrieved from ‘https://runescape.wiki/w/Thammaron%27s_Throne_Room?oldid=35628456’
Categories:
Hidden categories: