From the RuneScape Wiki, the wiki for all things RuneScape
Jump to navigation Jump to search
The Old School RuneScape Wiki also has an article on: osrsw:Waydar
Waydar? (edit) 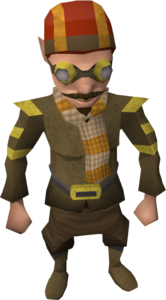 Waydar is a gnome pilot who can take players to Crash Island in his military-grade gnome glider once it has been reactivated during Monkey Madness. Players can speak to Daero at Blurberry's Bar in the Grand Tree to be transported to the hangar.

While compliant to the player, it is revealed that he and G.L.O. Caranock are plotting together to complete Glough's plan to start a war between the Gnomes and the Humans. He believes that if Awowogei, the ruler of Ape Atoll, were to execute the members of the 10th Squad, he could successfully blame the humans of Karamja and begin a new Gnome-Human war. Fortunately, the 10th Squad overhear this and, working with the player, they manage to overcome the trap set for them and prevent Glough's plan from succeeding yet again.