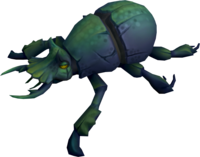 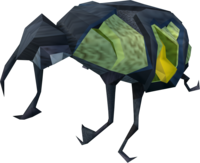 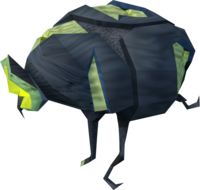 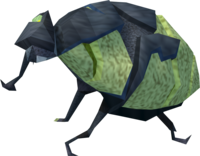 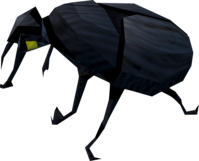 Small scarabs are found under the pyramid Uzer Mastaba during and after the Missing My Mummy quest. They are aggressive to all players regardless of their combat levels.

The scarabs come in two colours: black and mottled green. Other than their appearance, there is no difference between the types.

The small scarab counts towards fulfilling a Slayer task for Scabarites as well as Scabarites for city quests. Since the small scarab takes a long time to respawn (even on a full world), climb up the stairs to the first level of the pyramid and then back down to make all the small scarabs respawn immediately. This will save you the long wait in between. However, a much better place to fight scarabs is in the dungeon past the uninviting hole in the eastern part of the cave. It is teeming with aggressive scarabs.

The pyramid and the dungeon are both in the Kharidian Desert, and protection from Desert heat is advised. The desert heat won't be a problem once you're inside the pyramid or the dungeon.

One may appear when digging each crate in Do No Evil.

Pharaoh Queen Senliten's pyramid south-east of the ruins of Uzer. A few are located in the outer dungeon and these take longer than normal to spawn.

These are also located in past the uninviting hole located in the eastern part of the cave. Here, many level 41 small scarabites will aggressively attack the player despite their combat level. These will spawn much quicker than the ones outside and can be easily killed in large amounts for Slayer.

There is a shortcut to the area that needs to be cleared before using. Upon entering the second level of the pyramid, the player to go east then south to a small room with a click-able hole in the wall. After entering the room, a second hole can be entered, immediately south of the player. Using this second tunnel will clear it for future use from the main floor. Upon entering Uzer Mastaba, the player should take the first right into the room with the dais and go through the corridor, past the golem's remains. There should be a cave-in at the end of the corridor, which the player can enter to emerge in the scarab dungeon. It is two-way as well. 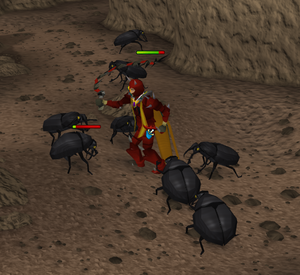 The small scarab cannot be poisoned.

In the dungeon, several small scarabs can stand in the same square when attacking the player, unlike how almost all other monsters behave. The small scarabs do not normally 'stack', but if the player runs through a bunch of attacking scarabs they may stack up. (Up to three in a single square has been observed.) This stacking means that the player can be attacked at the same time by more melee opponents than is normally possible. However, this potentially allows large numbers of small scarabs to be killed quickly using 3x3 area-damage combat such as many spells in the Ancient Magicks, Chinchompas, and Red chinchompas.

This information has been compiled as part of the update history project. Some updates may not be included - see here for how to help out!
Retrieved from ‘https://runescape.wiki/w/Small_scarab?oldid=35551364’
Categories:
Hidden categories: