From the RuneScape Wiki, the wiki for all things RuneScape
Jump to: navigation, search
The Old School RuneScape Wiki also has an article on: osrsw:Eagle transport system

Flying behind an eagle

The Eagle transport system is unlocked after completion of the Eagles' Peak quest. Players may use it to travel quickly to different Hunter areas as well as to the Jade Vine Maze. There are eyries in five locations: Piscatoris Hunter area, Rellekka Hunter area, Uzer, Feldip Hills and the Jade vine maze in Karamja.

A rope is required to travel using the eagles. Rope spawns are found in the Trollweiss and Uzer eyries, while ruined rope racks can be found in Eagles' Peak, Karamja , and Feldip. Players with sufficient construction levels and the correct resources can build rope racks over the ruined rope rack hotspots, which then become an infinite supply of rope.

The eagle transport system is rarely used due to the inaccessibility of the Eagles, as well as lack of interest in their respective locations. However, it connects the major hunting locations and also can be used for a few things, such as collecting Phoenix feathers and accessing the Dominion Tower.

Having fully unlocked the eagle transport system is a requirement for obtaining a trimmed completionist cape and the master quest cape.

To use the eagle transport system, you need to get to one of the eagles. Methods include:

The main Eagle Transport hub is inside the Eagles' Peak Dungeon, accessible after completion of the Eagles' Peak quest. Upon entering the dungeon at the top of the path of Eagles' Peak mountain, head east, then south until the door is visible at the end of the cave. Go through the door then all the way east, passing the eagle guarding the nest, until the cave turns north. The eyrie is at the end of the north tunnel. The ruined rope rack is visible as you enter the eyrie. Four eagles are available. Using a rope on an eagle takes you to one of the four locations.

Players with 18 Construction can build a rope rack inside the eyrie at Eagles' Peak using 3 planks, 5 ropes and 4 nails. This gives 252 Construction experience. 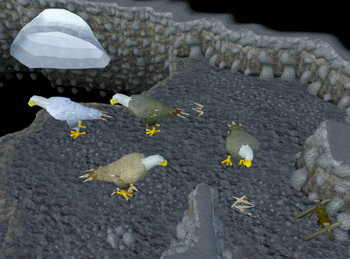 The Polar eagles can be found in the far north east of the Rellekka Hunter area, 35 Agility is required to ascend the cliffside into the eyrie, a rope can be found inside. 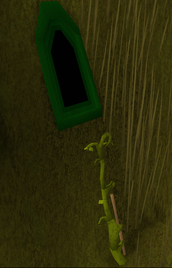 The Jungle eagle's eyrie is found near the western end of the Feldip Hunter area. The eyrie is located north-west from the hunting expert's shack. To enter, ONE of the following is required:

Use one of said item on the young vine near the entrance, once stuck down it will take around an hour for the vine to grow strong enough to support a player's weight. Once the vine reaches maturity, a message saying "those vines should be worth checking on now" will appear in the player's chatbox.

Players with 38 Construction can build a rope rack inside the eyrie using 3 teak planks and 5 ropes. Doing so yields 810 Construction experience.

You can climb down the vine from inside the eagle's nest before it is fully grown but you will not be able to go back up until it is grown. 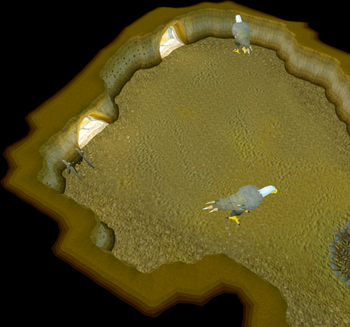 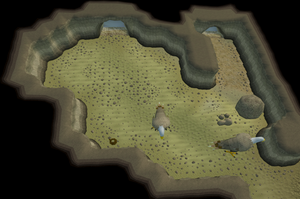 Desert eagles are located north of the Uzer Hunter area. While it is possible to fly to Uzer from Piscatoris, a boulder will obstruct the exit; it is required that the boulder is pushed from outside. You will need 45 Strength to push it away. A rope spawn may be found inside. This place provides convenient access to the Dominion Tower.

Eagle spot is in middle of west maze.

Karamjan Jungle eagles are available after completing Back to my Roots, and can be found deep within the Jade vine maze.

Players with 18 Construction can build a rope rack inside the eyrie using 3 oak planks, and 5 ropes. Doing so yields 540 Construction experience.

This is a somewhat useful method of transport for those who have not completed the Karamja Tasks, due to it being close to Shilo Village. 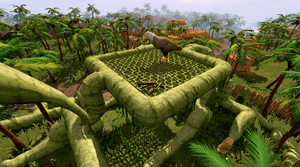