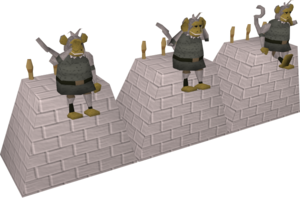 The three wise monkeys - Mizaru, Kikazaru, and Iwazaru - are three monkeys who reside in the Temple of Marimbo. They interact with the player as one entity and help you during the Monkey Madness quest and Freeing King Awowogei subquest of Recipe for Disaster. When first asked about it by the player, they claim each of them was cursed by King Awowogei to lose one sense, to try to prevent them from revealing his favourite dish. They say he had intended for them each to lose all their senses but the magician who cursed them had only enough ingredients for one spell. However, in Do No Evil it is revealed that they (along with the rest of the desert monkeys) actually lost their senses as a side effect when Amascut stole Apmeken's voice, sight, and hearing.

Mizaru is blind, Kikazaru is deaf and Iwazaru is mute, but they overcome their disabilities by co-operating with each other and communicating via sign language. This co-operation allowed them to escape the massacre of the desert monkeys carried out by Leeuni, Ayuni, and Eruni at Amascut's command.

They are important figures in the quest Do No Evil where the player reminds them about their goddess Apmeken and they charge the player into bringing monkeys back the desert, which the player does, taking them as well. After the player leaves a newly built colony, the monsters made from their goddess's stolen senses came and destroyed the settlement, kidnapping the monkey of which their sense had been stolen (EG: Blind Mizaru was kidnapped by Ayuni, made from Apmeken's sight). After being saved, the colony was rebuilt.