From the RuneScape Wiki, the wiki for all things RuneScape
Jump to navigation Jump to search
The Old School RuneScape Wiki also has an article on: osrsw:Uzer

Uzer (pronounced OO-zer) is all that remains of an advanced desert civilisation situated east of the River Elid and south-east of Al Kharid. Adventurers within the ruins of Uzer will suffer from the desert heat effect but not when in underground areas.

Uzer was once a very powerful city and currently the only known city in history which had the knowledge to create clay golems. In its golden age, it would most likely have been significantly larger than it is now. Uzer was inhabited by many magical craftsmen and is the place where the very first pyramid of Gielinor, the Uzer Mastaba, was built. Uzer was ruled by the Desert Pantheon back then. They were a group of desert gods who controlled the once enormous Menaphite kingdom.

When Zamorak returned from banishment and declared war upon the gods, the Gielinorian God Wars broke out and the Kharidian Desert became a site of many battles. Many other gods sent their armies towards the Kharidian Desert in attempt to conquer it for their own. The Song From Before The War described Uzer as the pinnacle of Saradominist civilisation. However, according to some carvings on the temple below the ruins of Uzer, the citizens of Uzer worshipped Saradomin, Zamorak, and Armadyl, so it could be that the religion of Uzer switched many times during the god wars.

Sometime toward the end of the God wars roughly 2500 years ago, Zamorak allowed his demon Chief- Lieutenant Thammaron to launch an assault upon Uzer. But Uzer was easily able to defend themselves with the use of their clay golems, almost completely destroying Thammaron's army.

However, Thammaron had planned to attack Uzer from the inside out. From his own throne room he opened a portal to Uzer's central temple complex. The surprise attack was successful, and Uzer's forces were quickly defeated and the city was completely destroyed. However, Uzer was still able to use a group of elite clay golems blessed by the desert pantheon to drive Thammaron back to his realm. Thammaron was heavily wounded and quickly died within his realm (his skeleton can be seen even today). 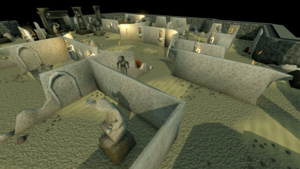 The remains of the once so fortified city.

Today, only ruined buildings remain, and no signs of previous human habitation are discernible. However, a single clay golem, albeit damaged, survived, preserved in the sand. In the Fifth Age, it was dug up by archaeologists and began wandering the city. The portal to Thammaron's realm also survived beneath the city. Thammaron's corpse and throne can still be found inside his realm, which is visited in several quests. The Uzer Mastaba survived the many battles and became the burial site of Pharaoh Queen Senliten. The quest Missing My Mummy takes place in said pyramid.

During Dishonour among Thieves the player finds General Khazard here in search of his mother. After going to the Shadow Realm the player finds Palkeera's body and a bloody journal. The player return to the regular realm and gives the journal to Khazard. Afterwards, Khazard is recruited for Zamorak's team to steal the Stone of Jas from Sliske.

The ruins of various buildings and large kilns are in the vicinity of the temple (the large kilns were used to manufacture golems). Several buildings contain crates. Many are extremely small. The city itself does not seem to have been extremely large–perhaps the size of Lumbridge or Draynor, though it may be that Uzer was once much larger but very little remains to be seen . The ruins and the golem are all that remain above the desert sands. Talking to the latter is the way to start The Golem quest. Though there are a number of golem parts strewn around the area, there are no human remains with the exception of ghosts in the temple basement. Very prominent in the area is a large, ornate building that forms the upper part of the temple complex. It is inscribed with the symbols of many gods and has stairs in the centre leading down to the temple basement.

Underneath the city lies the temple basement. To the north-east of the entrance black mushrooms spawn, while in the north-west, one can find a strange implement. Statues of craftsmen adorn the halls while golem pieces litter the ground. A few ghosts lurk in the hallways. At the far end lies a portal to Thammaron's realm. This basement, being underground, is safe from the desert heat effect.

Thammaron's Throne Room is red and grey, while a causeway of horns breaking the ground leads to his throne. To the right of the entrance lies the remains of Thammaron. Members can use a chisel on the throne to receive two cut sapphires, two cut emeralds, and two cut rubies. This room is also a focal part of the Shadow of the Storm quest.

Most of the below inhabitants are not technically permanent residents but do stay for a period of time.

Four quests heavily involve this location; they are:

The quest Missing My Mummy also takes place nearby.