From the RuneScape Wiki, the wiki for all things RuneScape
< Smoking Kills
Jump to: navigation, search

Optional: Go west, climb over a small rock wall, and use your rope on a piece of rock jutting out over the edge, this will give you quicker access in the future.

Inside the tomb[edit | edit source]

Note: leaving the tomb or logging out may revert some of your progress in the next section. 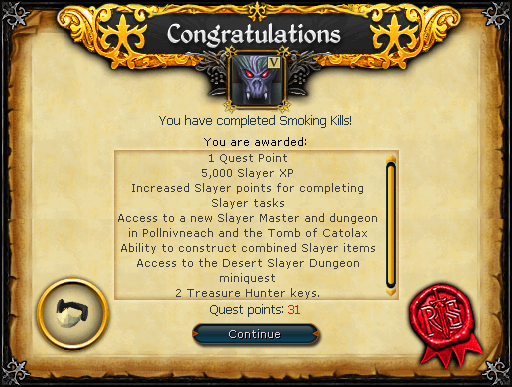 It is therefore an indirect requirement for the following quests and miniquests:
Retrieved from ‘https://runescape.wiki/w/Smoking_Kills/Quick_guide?oldid=33086528’
Categories:
Hidden categories: