From the RuneScape Wiki, the wiki for all things RuneScape
Jump to: navigation, search
Monkey knife fighter? (edit) 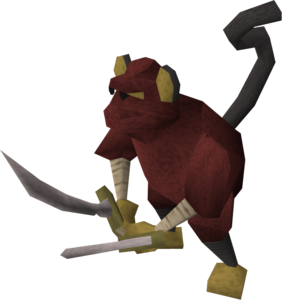 The fighters must be pickpocketed during Do No Evil for their monkey knives, six of which are needed to arm the guards at the Monkey camp. To pickpocket monkey knife fighters, the player must be wielding a Gorilla greegree, must knock the monkey unconscious by punching it, and then must pickpocket the unconscious fighter. Even if the pickpocketing attempt appears to succeed, a knife is not always looted, so multiple attempts will need to be made.

After bringing the knives from these monkeys to the monkeys in the desert, these monkeys can be pickpocketed for further Thieving experience and different loot, requiring level 70 Thieving. It is not necessary to complete the quest in its entirety to receive the different loot. 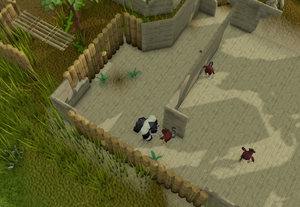 Knocking a monkey knife fighter unconscious will reward the player with 20 Thieving experience, and pickpocketing the unconscious monkey will reward the player with 150 Thieving experience. Failing to knock a fighter unconscious or trying to pickpocket from one while it is still conscious will result in the player being hit for 60 damage and being stunned for a few seconds. It's only possible to pickpocket a monkey twice while it's knocked out. If the player attempts a pickpocket when the monkey isn't knocked out, there is approximately a 1 in 5 chance of being sent to the jail on Ape Atoll. Three consecutive failed pickpockets will also result in jail time. It is possible to escape as usual, and if the player is still in monkey form, the monkeys on Ape Atoll will not attack. Since both punching and pickpocketing require right clicks, switching to the single-mouse-button setting (allowing everything to be done with just left mouse clicks) in the game's options may be more comfortable than having to right-click and then left-click.