From the RuneScape Wiki, the wiki for all things RuneScape
Jump to: navigation, search
The Old School RuneScape Wiki also has an article on: osrsw:Jex

Jex is a priest of Icthlarin and custodian of the Temple of the Lesser Gods in Sophanem, located in the north-east part of the city. He is fond of his position, but laments the dilapidated state of the temple that resulted from the city's quarantine and Simon Templeton's theft of some of its stonework. Like the other Sophanites, he is affected by the plague. 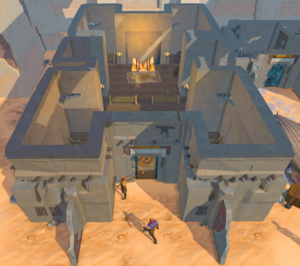 Jex by the dilapidated temple.

The update history project is a work-in-progress – not all updates to this topic may be covered below. See here for how to help out!
Retrieved from ‘https://runescape.wiki/w/Jex?oldid=35391265’
Categories:
Hidden categories: