From the RuneScape Wiki, the wiki for all things RuneScape
Jump to navigation Jump to search
The Old School RuneScape Wiki also has an article on: osrsw:Uzer Hunter area

Uzer Hunter area is Hunter area in the north-eastern Kharidian Desert, north-west of the Ruins of Uzer. This area was formerly labelled as Here be Sand on the world map.

The Uzer Hunter area is a comparably small hunter area, consisting mainly of a small series of clustered rocks. A variety of creatures can be found and captured here. There are several cacti in the area, meaning that players can refill their waterskins easily.

The most common method of reaching the Uzer Hunter Area is through Shantay Pass, which forms the southern border of Al Kharid. They must then travel east and slightly south until they reach a bridge of the River Elid. Once they have crossed it, the Hunter Area is very close by.

A second method is to use the Magic Carpets to travel from Shantay Pass to the Ruins of Uzer in the east. This costs 200 coins, or, if you have reached a certain point in the Rogue Trader mini-game, 100. The price can be further reduced to 75 coins if the player is wearing a Ring of Charos (a). To access the Uzer carpet route, players must have completed The Golem. 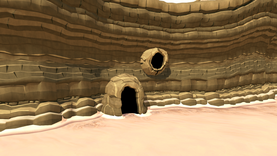 The home of the desert eagles.

Another possible method is to use the fairy rings. To the south of the Hunter Area is a fairy ring with the combination DLQ. This method is fairly fast, but requires that the player reach a certain point in A Fairy Tale II - Cure a Queen. They must also be wielding a Dramen Staff or a Lunar Staff (after Lunar Diplomacy), if they didn't finish Fairytale lll, although they can switch weapons once they passed through the ring. There are also several aggressive level 42 desert lizards in the area.

One final shortcut is to use the Eagle transport system, which requires completion of the Eagles' Peak quest. They player must first move a boulder in a cave north of the Hunter Area to use it. The player must also have a rope, which can be found in the eagle's nest.

The following creatures can be found here:

Because the Hunter Area is in the desert, players must drink water at regular intervals to avoid dying of thirst. It is recommended that players wear light clothing to reduce the amount of water they have to drink.