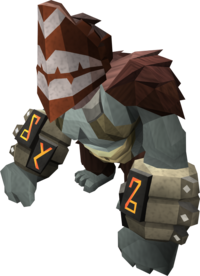 Leeuni is one of the three bosses encountered in the quest Do No Evil. She was created by Amascut, using Apmeken's stolen voice. She is located at the northern end of the Pollnivneach Slayer Dungeon, where the Banshee mistress used to be.

Leeuni is fightable along with her sisters Eruni and Ayuni as a class A boss monster in the Dominion Tower minigame if the player has completed Do No Evil.

Leeuni attacks with melee and a projectile attack that deals simultaneous damage with both Ranged and Magic. The attack cannot be completely blocked; only one portion of the projectile's damage can be negated as a result of a Ranged attack in combination with the Magic attack.

She occasionally removes players' helmets (masked earmuffs or slayer helm) throughout the fight, which lowers stats and causes 100 points of damage from the smoke in the well if the player does not re-equip it fast enough. If Leeuni cannot remove the helm due to a full inventory, players are dealt 300 points of damage instead. She also teleports around the arena every once in a while. Poison does not affect Leeuni, but Ranged seems to be relatively effective at hindering her teleport ability.

Show me those delicious lips!
Removing your facemask