From the RuneScape Wiki, the wiki for all things RuneScape
Jump to navigation Jump to search
This article is about the quest. For the achievement, see Crocodile Tears (achievement).

Crocodile Tears is the second of the four Fifth Age[1] quests released with the Menaphos city update. It is also the first quest to deal directly with the Menaphite goddess, Crondis.

The crocodiles of the open desert have become increasingly hostile and bloodthirsty, openly and often attacking residents and travellers of the Elid. This aberrant behaviour points to a change in their patron goddess, Crondis, whose manner kept them passive and civil in the historic past.

Appease a goddess, dig deeper into Amascut's Menaphite manipulations, and attempt to heal this latest plague of the Devourer.

To begin, enter the Uzer Mastaba, found south of the ruins of Uzer and north of Nardah. Make your way to Senliten, the pharaoh queen. Upon asking her about the quest, she will relate a story of how once in the past she and her retinue were waylaid near the River Elid and one of her attendants was set upon by a crocodile. She realised the nature of the minor god Crondis in the crocodile's determined yet modest behaviour.

However, as Leela adds, the crocodiles along the Elid have lately taken to attacking the citizens of Pollnivneach and Nardah and dragging them back to the river. She notes that this may point to issues with the animals' patron goddess, but given your scepticism, she directs you to the priest Jex and the Sphinx in Sophanem for gathering further information.

Jex can be found by the doorway of the temple for the minor deities, in the north-east corner of Sophanem. The Sphinx roams to the north of Klenter's Pyramid and will only speak to you if you have a cat in your pack or following you.

Speak to both of them about the minor gods - you can go through all of the dialogue to learn what they know about each of the four minor deities, particularly the crocodile goddess, Crondis. Go through all the chat options, especially for Jex, until you "understand why she is so important." Jex has also noticed the growing brazenness of the crocodiles and believes something is in fact wrong with the deity.

Return to Senliten's tomb and speak with her. She charges you to restore the modesty of the crocodiles, wherein you must locate Crondis and resolve her problems, whatever they may be. To find the goddess, the queen permits you to take a relic she received from a genie that helped her find an oasis in the desert when she needed it.

The mirage of Crondis[edit | edit source]

Senliten informs you that the relic - a dowsing rod - is stored inside the boat replica at the mastaba's entrance passage. Talk to Leela to exit the temple and re-enter (by choosing the 'explore' option) to access the passages quickly. Head north and loot the stone ship to obtain the dowsing rod.

Using the dowsing rod is similar to solving a Treasure Trails compass clue. Head in the direction that the arrow is pointing until you get a chat message. Energy potions or mint cakes can come in handy for this part, as you will be running through a large part of the desert.

It is possible to teleport near the locations, such as the Pharaoh's sceptre teleport to the Agility Pyramid (Jaleustrophos) to reach Sophanem and the Bandit Camp to reach the Bedabin camp. However, it's possible to break the dowsing rod's tracking by teleporting to Bandit Camp lodestone.

After finding the three oases, it's obvious that the relic isn't working the way you need it to. Return to Senliten.

At Senliten's tomb, she realises that the relic has to be attuned to Crondis before it can locate her. To do that, you have to seek out the Elid elementals, Tirrie, Nirrie and Hallak at the Water Ravine Dungeon, source of the River Elid.

Leave the mastaba and head north-west, making your way to the headwaters of the Elid in the desert's northern cliffs. If you have a Dominon medallion, you may teleport to the Dominion Tower, exit, and head around to its northern side. If you have a Traveller's necklace, teleport to the south of the Desert eagle's eyrie and run west. Using the rope, climb the waterfall and pass both sets of doors using the relic as a key.

Run along the shore and ask the Elid elementals for their help in charging the relic. Once they agree, the dowsing rod will now be able to properly locate Crondis.

The rod will now point you towards the south-west region of the Port district of Menaphos. Use of the charter ships or Shifting Tombs can help reach this corner of the district faster. On the western docks, speak with Portmaster Kags and he will gladly transport you to the isle of the Crondis's pyramid.

In the presence of a goddess[edit | edit source] 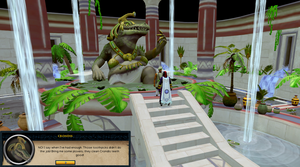 Head inside the pyramid to find in flesh Crondis, the crocodile goddess, and Tamsah, her apparently overworked High Priest.

Tamsah will secretly try to warn you about his goddess's change in behaviour (which has become decidedly less resourceful and modest), always careful not to let her overhear. As you plead Crondis to intercede in the attacks of crocodiles on the desert's inhabitants, she casually insists that hungry crocodiles are nothing new. In fact, she would fancy a snack, and commands you to bring her one.

You must wait for Crondis to demand a new item before collecting it. Anything collected beforehand will not be accepted, since it would not be considered fresh enough. Items you already have in the bank will not work; they must be gathered/collected at the source, only after being requested.

Once you obtain the resources that she demands, simply head back to the pyramid and talk to Tamsah or Crondis to hand over your offerings.

After you deliver the 16 croc ices, Crondis demands 32 more. You can either rebuke her greed or stay silent, which will allow you to quickly bank and gear up for combat before proceeding. 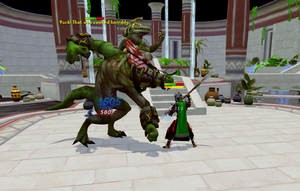 The fight with Crondis' corruption. 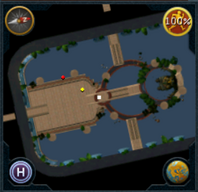 Use this location with a range weapon.

It is recommended to stock up a full backpack on food or healing potions, as this challenger utilises a special move enabling it to steal your food items, one by one. Also, the fight with Ukunduka is instanced, and will not warn players if they drop items. When the fight ends, players will be sent back to the non-instanced pyramid without a chance to pick up any dropped items.

When ready for the fight, return and speak to Crondis. Instead of agreeing to her new demand, you repeatedly refuse and rebuke her greedy behaviour. Crondis swells with anger, stammers at your accusations, and before she can complete her thought, she will spit up some corruption which resolves into the form of a crocodile warrior named Ukunduka.

You must now fight Ukunduka, who has 75,000 life points and uses both melee and ranged in combat. You can safe spot it from the stairs leading up to Crondis, and restrict it to using only ranged or magic attacks. If one chooses to use melee, only a halberd will allow use of the safe spot.

As a special move, it will steal and eat food in your backpack and heal for that amount. If you choose melee to fight him, you can carry onions, cabbages or other cheap food to preserve your high-healing food. Purple sweets do not count and Ukunduka will not eat them. Ukunduka's food stealing special move starts from the leftmost food item from the topmost row of your backpack, progressing to the right and then to the next row. Hence, it is highly recommended to stack your cheap food at the top of your backpack, and your good healing food at the bottom. Alternatively, Ukunduka does not treat raw fish, Saradomin brews, and baron sharks as food, so you can use a bunyip with Bunyip scroll (Swallow Whole)s or carry only baron sharks for healing.

After defeating the crocodile spawn, speak with the dispossessed Crondis and her much-relieved High Priest. Request her to address the crocodile attacks across the desert, and the goddess will agree at once.

Return to Senliten at her tomb, where you'll find Osman arguing with Leela over the handling of the problem in Menaphos. Leela defends her support of the queen and your aid in these events, while Osman belittles your efforts, seeing his own plans as the right path. Washing his hands of her, the spymaster calls for your support in the near future before departing.

You relay to Senliten the events that occurred in Crondis' pyramid and that she is once again back to spreading restraint over her crocodile kin. Though concerned with Amascut's latest schemes, both the Queen and Leela calm down when you inform them about Ozan's efforts to find the Kharid-ib under Menaphos.

As your discussions continue, another cutscene begins, wherein Jabari informs the Pharaoh that Amascut's hold over Crondis has been removed. They discuss increasing the payments to bandits to keep the citizens inside the city fearful, and of the greater plans to replace the Menaphite Pantheon. 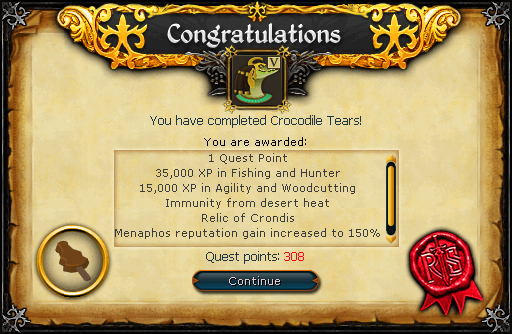 Crocodile Tears is directly required for the following quests/miniquests: