From the RuneScape Wiki, the wiki for all things RuneScape
Jump to navigation Jump to search
The Old School RuneScape Wiki also has an article on: osrsw:Ape Atoll

Ape Atoll is an island that is located in southern Gielinor. It is inhabited by monkeys, who are ruled over by King Awowogei. Its capital city is Marim. It is only accessible to players who have started the Monkey Madness quest. Players who have not taken the form of a monkey using a greegree will find that all non-player characters will be aggressive, regardless of the player's combat level. Almost all of the monsters here are poisonous, so players may wish to bring antipoison.

Originally, players who wanted to travel back to Ape Atoll after the Monkey Madness quest used to have to accept Daero's reward first (which includes Attack, Strength, Defence, and Constitution experience) or wait for an evil tree to appear there. Players who have completed the quest can now speak with Daero and travel to Ape Atoll without accepting the experience reward. This change was made for pures who do not wish to gain unwanted levels. 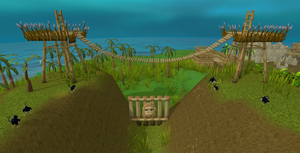 The entrance to Marim, town of the monkeys.

There are four ways of getting to Ape Atoll: 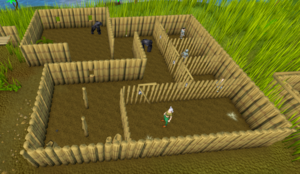 The prison of Ape Atoll

Players are thrown in prison as a part of the Monkey Madness quest. Players should avoid the two prison guards - Trefaji and Aberab - at all costs. If not avoided, players will be beaten back into their cell, causing up to 2,000 damage and foiling your attempts to escape. The prison is also home to a group of three laid-back gnomes of Lumo, Bunkdo and Carado. The corner of the prison is a small room where players can hide from the guards after escaping, and is home to a tiny poisonous level 1 spider. Players can escape their cell (they will also be thrown into the same cell) by picking the lock, and escape the building while the guards are changing shifts. The guards take it in turns to patrol while the other waits in the guardroom. They will go down the passage to the cells where they will pace up and down two times before returning to the guardroom to change shifts.

The patrolling prison guards can be blocked by other players standing in their path, in order to help players escape the prison. 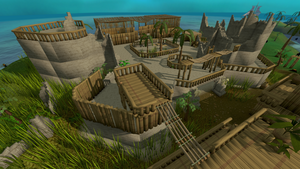 Located at the north-east corner of the city, the temple is home to several monkey guards. The temple was once a very popular training area, due to the fact that there are two prayer altars inside. Up the stairs near the altar is Hafuba, on the top floor you can find Lofu and Denadu and in the north-west corner there are the three monkeys: Iwazaru, Kikazaru, and Mizaru, who are involved in the Freeing Awowogei subquest of the Recipe for Disaster quest.

When training and you find you have no food left, you can go to the red banana tree to the west and pick the bananas and slice them. This provides you with a never-ending food source. The bananas grow back each time. To do this, you need a knife, a rope, and a monkey guard greegree. 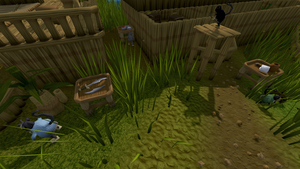 The marketplace in Marim.

The marketplace has several stalls, some of which can be stolen from for Thieving experience. There is also one general store. 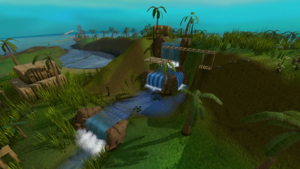 The Ape Atoll has the best training ground for medium level (70-75 is recommended to begin training here, unless using surefooted aura) Agility training (up to level 80, after that the Dorgesh-Kaan course is a better choice). With lower Agility levels, the failure rate on the obstacles here makes efficient training infeasible. A ninja greegree is required for access to the course. While players can bring cats with them to Ape Atoll, if they attempt the agility course with a cat out, they will receive a message saying "Your little friend can't make it over the obstacle ... so you pick it up" and their cat will be put in their inventory.

This place is ideal for the surefooted aura as players 48-70 can get the max exp rate for 20 min which is around 16-18k exp. This is an easy 1-3 levels for 20min for work and is highly recommended for Agility levels 48+. 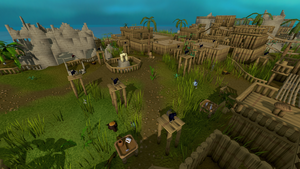 Ape Atoll features a decent supply of hardwood trees. Just outside the main gate there is a mahogany tree. A bit south there is another mahogany tree. Also, on the south-east part of the island, there are three teak trees. The mahogany tree is reasonably close to the Ape Atoll teleport. The teak trees are not as conveniently located, but by using a ring of duelling to teleport to Al Kharid and then the gnome glider system, trips to the bank and back to the teak trees can be made in as little as ninety seconds. Interestingly, when a player cuts the trees in monkey form, there is no swinging of a hatchet, but the logs are acquired.

The teak trees are very good for Woodcutting experience once a player's Woodcutting level is above 90. Many players train to level 99 by levelling on these teak trees: simply cut and drop. It is possible to gain over 75,000 experience points per hour doing this. A great way to do this is to go in the middle of the 2 close teak trees and repeat chopping them.

This has become a very good place to train Woodcutting while making money for those who have completed the quest Deadliest Catch, as they now have access to a bank deposit box very close to the hardwood trees. 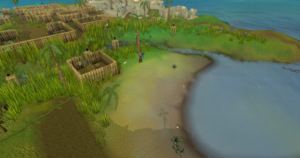 There is one fishing location where you can catch sharks and bass. This can be a good spot if you wish to catch sharks away from the crowds in Catherby and the Fishing Guild if you have completed Deadliest Catch. The spot never disappears, it just moves from spot to spot.

In addition to the hardwood trees: 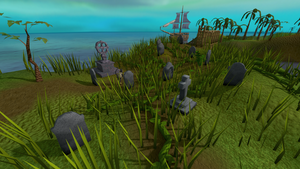 A graveyard on Ape Atoll. 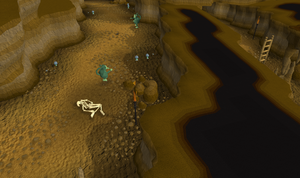 The dungeon under Ape Atoll.

The entrance to the Ape Atoll Dungeon is found in the jungle area. The NPCs in this dungeon are a great place to use red chinchompas for some extremely fast ranged training. The monsters are aggressive and roam around, so a single projectile can hit multiple targets with substantial overall damage and the corresponding high ranged experience rates. Players can also use ice burst there to gain similarly fast Magic experience. Ice barrage is a faster alternative than burst. However, ice barrage has a high cost due to using blood runes instead of death runes. Bring lots of antipoisons because they poison quite often.

Parts of these quests take place on Ape Atoll: