The Grand Tree, or Ta Quir Priw in gnomish language, is home to a gnome community and is built inside a tree in the north-east of the Tree Gnome Stronghold. It contains Blurberry's Bar, Heckel Funch's Shop, Rometti's Fine Fashions, and Gulluck's weapon shop. It is also one of the spots for Penguin Hide and Seek.

The Grand Tree includes two of the three banks in Tree Gnome Stronghold, several shops, and a bar and restaurant. The Gnome Restaurant minigame is on second level, and players who have completed The Grand Tree quest can access the Grand Tree Mine. There is an Agility shortcut north-east of the Grand Tree, which can be very useful for players training Barbarian Fishing. 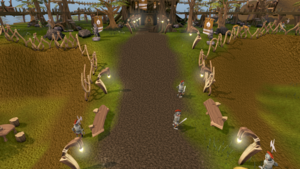 Players can find King Narnode Shareen on the ground floor. Players can speak to him to begin (and later end) the Monkey Madness quest. There is also a trapdoor that leads to the Grand Tree Tunnels (and a mine), though players must have completed The Grand Tree in order to use it. 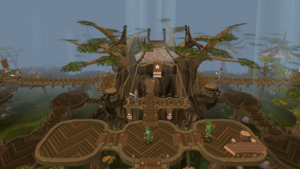 The second floor of the Grand Tree.

The third floor contains only a small jail that Glough locks the player in during The Grand Tree quest, and a Gnome glider which can be used to travel to various places in Gielinor.

Most of the tunnels are little used except during The Grand Tree quest. See Grand Tree Tunnels for details.

Concept art of the tree.