From the RuneScape Wiki, the wiki for all things RuneScape
Jump to navigation Jump to search
This article is about the item obtained after Do No Evil. For the loyalty shop item, see Pharaoh ankh.
Item JSON: {"edible":"no","disassembly":"no","stackable":"no","stacksinbank":"yes","death":"reclaimable","name":"Ankh","bankable":"yes","gemw":false,"equipable":"yes","members":"yes","id":"25123","release_date":"26 September 2012","release_update_post":"Ozan Quest Double Bill","lendable":"no","destroy":"You can get another ankh relic by re-entering the Apmeken tomb.","highalch":false,"weight":2.267,"lowalch":false,"tradeable":"no","examine":"A symbol of life.","noteable":"no"}

The ankh is an off-hand item found in the Apmeken tomb in the wall surrounding the Monkey colony after completion of Do No Evil. The cave can be entered by using the "Climb to exit" on a point near the top of the south wall. An Apmeken mask can also be found in the cave. To see the fissure, Diamond in the Rough must have been completed.

Entering the tomb requires level 80 Agility, rewarding 20,000 Agility experience when entering for the first time. Experience boosts and double experience can be used to boost the experience reward.

Equipping the ankh together with the Scabaras mask while in the desert completes the elite Desert achievement Ankle Support.

Since 5 June 2017, the ankh can also be worn as a cosmetic override called Pantheon (Apmeken) Ankh. 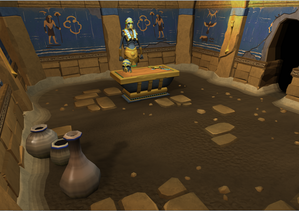 The tomb where the Ankh can be obtained.