From the RuneScape Wiki, the wiki for all things RuneScape
Jump to: navigation, search
The Old School RuneScape Wiki also has an article on: osrsw:Ice Barrage

Ice Barrage requires a Magic level of 94 to cast and can freeze your targets, immobilising them for 9.6 seconds. It has a 100% chance of freezing targets when cast as an auto-attack. If this spell is used with an ability, it only has a 10% chance of freezing, or a 20% chance if the caster has Dark Form active, the effect will attempt to trigger and display the freezing animation but will not freeze the target or consume runes if the target is stun immune. It requires two blood runes and five water runes to cast. The base damage of this spell is 902 and scales up to 950 at level 99 Magic.

When cast as an auto-attack, this spell will strike a 3x3 square area surrounding the target, hitting other players and monsters in this space. Damage to secondary targets is 35% less.[1]

Ice Barrage is widely used in team minigames as it can freeze multiple players at once, preventing them from tasks like scoring in Castle Wars or reaching an avatar in Soul Wars.

As with all Ancient Magicks spells, the quest Desert Treasure must be completed in order to cast this spell. 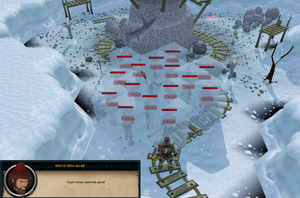