From the RuneScape Wiki, the wiki for all things RuneScape
Jump to navigation Jump to search
The Old School RuneScape Wiki also has an article on: osrsw:The Feud
For the achievement, see The Feud (achievement).

The Feud is a quest about a conflict between two Pollnivnian gangs.

Ali Morrisane – RuneScape's self proclaimed 'greatest merchant' – is having difficulties. He is selling things at such a rate that he cannot keep his market stall in stock.

Word has it that he is on the lookout for someone; someone who can recruit some help from his home town Pollnivneach – a somewhat anarchic place, south of the Shantay pass.

) sign. When talking to him ask him "If you are, then why are you still selling goods from a stall?" to start the quest. He needs you to go and find his nephew, 'Ali', who lives in a small town south-east of Al Kharid called Pollnivneach. Buy the Kharidian headpiece and fake beard and use them on each other to get a Desert disguise.

Be sure to have some Waterskins and then head to the little village of South Pollnivneach. You can either walk, travel by magic carpet by talking to the Rug Merchant just east of the Shantay Pass, teleport directly to Pollnivneach using a slayer ring or the Slayer cape to teleport to the Slayer Master Sumona, or by putting your house in Pollnivneach and teleporting there.

Head to the south-east corner of the village and head into the bar. Buy 3 beers from Faisal the Barman, then talk to Jalal the Drunk. He wants beer, in return for information. Use beers on him, one at a time and he will reveal a bit of information at a time. After giving him the three beers, he will tell you that Ali Morrisane's nephew was involved with the Menaphites and Bandit gangs. Alternatively, you can speak to one of the street urchins wandering the town to get the same information.

Head west of the bar and talk to any Menaphite Thug. When you ask them a few questions, you learn that the gangs are feuding with each other over a stolen camel. The Menaphites will tell you that the only way of ending the feud is if the Bandits give them back the camel. Talk to any Bandit in the northern part of the city, for the other view of the same tale. You need to talk to both groups before you can continue. Don't try to go to the Bandit Camp because none of those bandits will talk to you.

Go to the Discount Camel store, which is located north-west of the bar. Ask Sami the Camel Man for two camels. Offer him 500 coins, and you will receive two camel receipts. Give the receipts to each gang, one to any Bandit in the north part of town and the other to the Menaphite Thug in the south/west part of town.

Now you must join one of the gangs. Go and talk to Rashid the Operator, who can be found around the large Menaphite purple-gold tent in the south west of town. Your first task is to pickpocket 3 villagers. The 3 villagers have to be looted in three different ways and you will need to return to Rashid for advice between each pickpocketing: 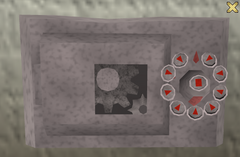 Now Rashid wants you to steal the mayor's wife's jewels from the safe in their villa. He will give you the keys to the front door of the villa. Now, put on your desert disguise (if you do not have the materials, the market seller in the northern part of the town sells them). Only certain types of "gloves" will allow you to case the villa. Some that work are: leather gloves, coloured gloves, zombie gloves, Karamja gloves, ice gloves, carapace gloves, etc. Gauntlets will not work unless they are metal. Vambraces, batwing gloves, tracking gloves, and spider silk gloves all do not work.

The villa is located just north-east of the bar, or directly east of the Discount Camel Store. There is a fountain in the courtyard of the villa to make it easy to find.

Hide behind the huge cactus outside the mayor's villa by clicking on it. After spying around the house (note, you literally need to run in a circle around the villa, at least once, to unlock the door by using your key on it), you see that the villa is empty and it is safe to go in. Use your key on the door to get inside.

Search the study desk, and you will find a note with a riddle and several numbers written on it. Go up the staircase and search the bed. You will find another note with "Fibonacci" written on it. Then, search the landscape picture hanging beside the bed and you discover the safe. You must click 1, 1, 2, 3, 5, 8, on the dial, which is the famous Fibonacci sequence. The dial is set to 0. The numbers progress from 1-9 (clockwise). Once the combination is entered, the safe will open and you can take the jewels.

Note: If you have no inventory space, you will have to enter this sequence again. 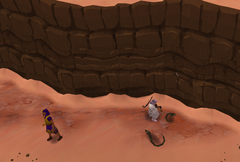 A player playing the snake charm

Give the jewels to Rashid the Operator and he gives you your final task: find the traitor in the Menaphites.

Talk to any Menaphite gang member and they will say that "It must be Traitorous Hesham". Go back to Rashid The Operator and he will tell you to finish off the traitor. Go back to the bar and speak with the barman to find out that the beer on the table belongs to the traitor.

Go north-west of the Kebab shop, upon the hill to Maysa the Hag. She can make a poison for you, if you can get her some snake venom and camel dung. 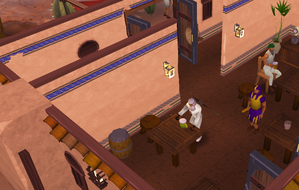 Using the poison on the drink

Go back and give the snake basket and the Ugthanki dung to Maysa the Hag, and she'll exchange it for a bottle of poison (you may have to speak with her a second time to hand over the dung and receive the vial). Go to the pub once more and use the poison with the beer on the table (the beer mug will turn green momentarily), and go back to Rashid the Operator. 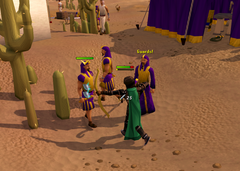 Now that you have completed Rashid's three tasks, he trusts you and tells you to talk to his leader (who magically appears outside the tent). After talking to the Menaphite Leader, you decide to kill him as he is a follower of Amascut, who is just a little crazy with world domination schemes! A level 54 tough guy arrives to fight you. He can be safe spotted from the camel pen. Kill him and he will drop a willow-blackjack. Seeing this, the Menaphite leader will run away, vowing to come back for revenge.

Talk to a villager, and instead of being happy about the resolved feud, they are angry with you for upsetting the balance of power and that you need to deal with the Bandit Leader too. He can be found just east of the northern magic carpet. Talk to the bandit leader and you will tell him to the leave town, "or else". The Bandit leader tries to argue, saying that the villagers will never acknowledge your acts, but you are adamant about him leaving. He will not leave without a fight, so he summons his level 54 bandit champion. He can be safe spotted within the house to the right.

When you are done, talk to any villager again. The bandit leader was right, they are still ungrateful! Go talk to Hakeem the Mayor, who is a little more respectful. He can be found walking around the centre of the town. He will tell you about the whereabouts of Ali Morrisane's nephew. Return to Al Kharid and speak to Ali Morrisane, where you surmise that Ali and his nephew are too similar to be different people and attempt to understand what he was trying to sell to you and why. He then suggests that it was a ploy to promote tourism, and you admit that he is indeed a skilled salesman. He will then give a reward after selling you some more merchandise. 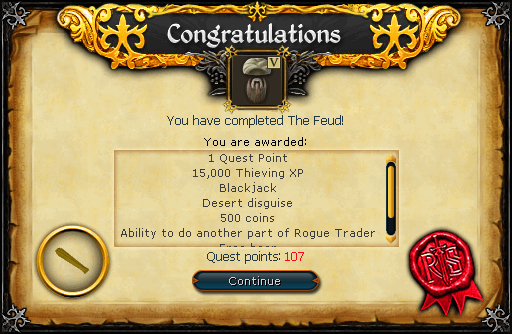 The Feud is directly required for the following quests/miniquests: