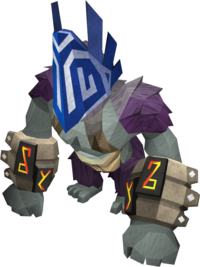 Eruni is one of the three bosses encountered in the quest Do No Evil and was made by Amascut using Apmeken's stolen hearing. She is found in Thammaron's Throne Room under the ruins of Uzer.

Eruni can be fought together with her sisters Ayuni and Leeuni in the Dominion Tower minigame if the player has completed Do No Evil.

Unlike her sisters, Leeuni and Ayuni, Eruni stays immobile during the entire fight. She attacks with a projectile attack very quickly, each projectile deals both magic and ranged damage simultaneously. As a result, only damage from one style of attack can be reduced using prayers, which reduces effectiveness of Protection prayers from 50% to roughly 25%.

Eruni summons lesser demons to aid her in combat when her health reaches certain points (one demon in the beginning of the fight, two when at 75% life points, three at 50% and four at 25%). Eruni is completely impervious to attacks while there are any demons summoned, meaning the player has to kill the demons off first. As the demons are killed, Eruni's blue magical shield fades.

Eruni can deal damage even when any demon is present, which makes her very dangerous if the player does not position themselves properly to kill lesser demons. Since the demons are much weaker than Eruni but are not aggressive, it is recommended to snipe the demons while hiding from Eruni whenever she is protected. Turning off Auto Retaliate is also strongly recommended because her attacks would attract the player to attack her and move away from their position.