Ava's alerter is an upgraded version of Ava's accumulator that can be obtained during the Do No Evil quest. Full quest completion is not necessary to obtain this reward. In the quest, the player takes a metal crate to Ava in order to get a device that can detect buried metal items. She then takes your accumulator and adapts it to search for the exact same metal boxes.

Since it requires an Ava's accumulator to obtain, the minimum Ranged level needed to wear this item is 50. The improvement is that it has a better armour rating, along with an increased ranged damage bonus. It also gives one free elite clue scroll after completing the quest. Just like the accumulator and attractor, Ava's alerter doesn't work while wearing a metal body. However, certain metal bodies that count as hybrid armours such as the Warpriest armours do work with the alerter.

If the alerter is lost it can be re-obtained from Ava by using the 'Buy Device' option and selecting the alerter. This will get players a new alerter (for 999 coins and 75 steel arrows).

The alerter can be toggled to not retrieve anything other than ammo.

During the quest, the undead chicken in Ava's alerter will squawk with increasing excitement as you get closer to a metal box. One "Bwuk!" means you are standing anywhere between nine and five squares from the box. "Bwuk! Bwuk!" means four, three or two squares. Three squawks means one square, and four squawks means you've found the buried treasure. Dig!

The alerter is capable of detecting crates containing a bonus elite clue scroll. There are four possible locations where the elite clue scroll can be found. Each player can find a scroll in one of four locations.[1]

Requirements: Completed Do No Evil, Ava's alerter (equipped without metal armour in the chest slot), spade in inventory, not on tool belt.

If the alerter fails to detect anything, move onto the next location. The coordinates in each location appear to be the same for each player. 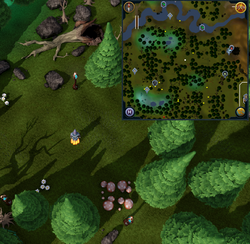 Start in Lletya. Run west out of Lletya, cross the tripwire, and go through the dense forest to the northwest (not over the leaves). Next, go northeast and hop over the leaves. In the next clearing your alerter should start bwuking. Dig where it bwuks four times just like in the quest.The coordinates for this location are "1 degrees, 31 minutes north, 5 degrees, 5 minutes west" (1° 31' N, 5° 5' W).

Alternatively, using the Tirannwn lodestone and going north-east is another fast route to this location.

Or from Prifddinas, head south past the guards, cross the river at the log to the east, then pass though a dense forest. 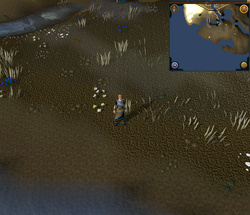 The scroll can be found on the southwest part of the island, west of the astral altar and south of the city, slightly west of the little peninsula. Dig where it bwuks four times just like in the quest. The coordinates for this location are 21 degrees 50 minutes north, 11 degrees 7 minutes west. 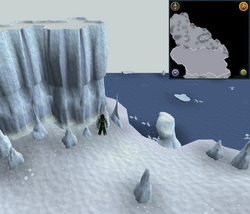 On the iceberg from the penguin quests. After getting off the boat, run north-west to the giant ice column that you can see on the minimap. It's on the north-western side of the column. Dig where it bwuks four times just like in the quest. The coordinates for this location are 26 degrees, 16 minutes north, 6 degrees, 20 minutes east. 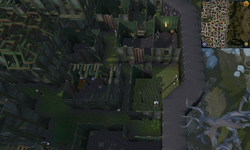 The easiest method is to use Drakan's medallion to teleport to Meiyerditch Laboratories, then make the quick trek south, opening doors and stepping through tapestries as necessary to move freely. If Drakan's Medallion is unavailable, take the boat from Burgh de Rott and get caught by a Vyrewatch. Choose to do hard labour and get sent to the mines. Ask a miner for a spare pickaxe, mine 15 daeyalt ore, deposit them in the mine cart, and then talk to one of the guards to be let out. Then run south along the eastern wall. The spot is in an indent in the wall (on the minimap), right next to a sitting child. Dig where it bwuks four times just like in the quest. The coordinates for this location are 3 degrees, 41 minutes north 37 degrees, 31 minutes east.

The alerter works with:

Other items that the alerter can occasionally attract and deposit in the inventory include: