From the RuneScape Wiki, the wiki for all things RuneScape
Jump to: navigation, search
For other variants of this item, see non-corrupt.
Corrupt dragon battleaxeC. dragon battleaxe (deg)? (edit)? (edit)

The corrupt dragon battleaxe is the strongest battleaxe available to non-members, but it crumbles to dust after 30 minutes of wielding. This weapon also gives the second highest damage bonus for non-members (succeeded by the Corrupt dragon spear). It requires 60 Attack to wield. Although it has a higher damage output per second than its one-handed rune counterparts, its price and short lifetime makes it completely impractical for training. It is currently the second least expensive corrupt dragon weapon, ahead of only the corrupt dragon longsword.

Players can obtain this item either by trading with another player, or by receiving it as a rare drop from killing Revenants or the Chaos Elemental.

In Wilderness, when a player is killed with the degraded version of this weapon, coins are dropped instead of the battleaxe (approximately it's half GE price * remaining lifetime in minute/30minute).

Warning: Once you wield this item for longer than a few seconds, it will have the word (deg) added to its name and it becomes permanently untradeable until it vanishes. Using this item in combat adds the (deg) to its name almost instantly, also rendering it untradeable. It may be assumed that this has been done to prevent players from using it and then selling it when there is only a little amount of time left for it to degrade.

It can be bought from the Grand Exchange in Varrock. The Corrupt dragon battleaxe's initial price was 120,000 coins. 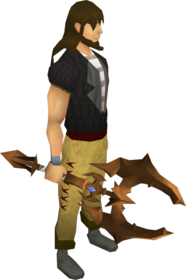