From the RuneScape Wiki, the wiki for all things RuneScape
Jump to: navigation, search
The Old School RuneScape Wiki also has an article on: osrsw:Revenant dark beast 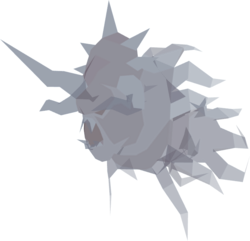 The revenant dark beast is a type of monster, that inhabits the Forinthry Dungeon, along with all other revenants.

The Forinthry Dungeon is a PVP-enabled area that is part of the Wilderness. It is entirely possible for other players to attack you whilst fighting the revenants in the dungeon. Do not bring equipment that you are not willing to lose.

Like all revenants, they can restore health quickly, can cure themselves of poison and react quickly to a player's protection prayers.

The ghostlevel used to calculate the drop rates of the revenant dark beast's unique items is 10.58, and the revnumber is 5671.[1]