From the RuneScape Wiki, the wiki for all things RuneScape
Jump to navigation Jump to search
The Old School RuneScape Wiki also has an article on: osrsw:SilverlightThe RuneScape Classic Wiki also has an article on: classicrsw:Silverlight
For other uses, see Silverlight (disambiguation).
Item JSON: {"edible":"no","disassembly":"no","stackable":"no","stacksinbank":"yes","death":"reclaimable","name":"Silverlight","bankable":"yes","gemw":false,"equipable":"yes","members":"no","id":"2402","release_date":"4 January 2001","restriction":"surface","release_update_post":"Runescape beta is now online!","lendable":"no","destroy":"You can obtain it from Gideon Bede in the Saradominist church in north-east Varrock. You can also reclaim it from the quest storage chest.","highalch":false,"weight":1.814,"lowalch":false,"tradeable":"no","examine":"The magical sword Silverlight. (Demon Slayer)","noteable":"no"}

Silverlight is a magical sword used during the Demon Slayer quest, and can be kept afterwards. This weapon cannot be made by players using the Smithing skill. If Silverlight is lost during or after the quest, it can be reclaimed from Gideon Bede in the church north of the Varrock Museum for free. It can be sold to the Wise Old Man for 80 coins.

Silverlight is dyed black during the course of the Shadow of the Storm quest to make Silverlight (dyed), and later becomes Darklight after killing the demon Agrith Naar. Silverlight (but not dyed Silverlight) can be mounted on the wall of a quest hall in a player-owned house. 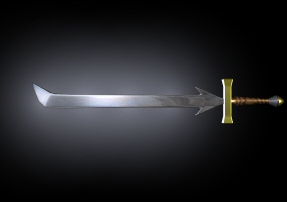 Artwork from the God letters.

Silverlight is an extremely weak weapon when fighting non-demon monsters, with damage and accuracy equal to a Bronze longsword. However, when using the sword to fight most varieties of demon, it will gain a large accuracy increase (enough to accurately hit mid-level demons resistant to melee). It also increases ability damage by a scaling 25-124% (a 1.25×-2.24× multiplier), based on your base Attack and Strength, and the monster's base Defence; this applies to your total ability damage, including off-hand weapons, equipment, and boosts. With auto attacks, 100% is added regardless.

The increase is given by

Additionally, Silverlight is used to remove the fire shield from a tormented demon, the only other way being holy water.

The following creatures will take increased damage from Silverlight:

Silverlight does not affect the following: 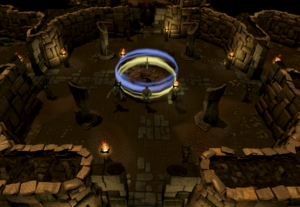 The crypt where Silverlight is kept 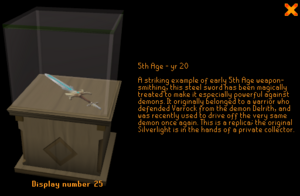 Silverlight appears to have been forged in the early Fifth Age, as according to Varrock Museum's display case for Silverlight, it is "a striking example of early 5th Age weapon-smithing". Despite its name indicating that the weapon contains silver, Varrock Museum's display describes Silverlight as a steel sword that has been enchanted to make it powerful against demons.[3] Delrith's dialogue in Dimension of Disaster suggests that the sword's name derives from its silver colour, rather than it being literally being made of silver.[4] However, Vampyre Juvinates can be harmed by Silverlight as if it were a silver weapon, making the sword's true composition a mystery.

In year 19 of Fifth Age, a legendary hero named Wally used Silverlight to battle Delrith, and banishes him back to Infernus.[7][8]

According to 'The Tales of Wally', a book written by Wally's son Waldo, Silverlight originally belonged to an unknown warrior, who was killed by a moss giant in the site of modern Varrock Sewers while attempting to flee through the hole in the wall Wally had mined. When the warrior had thrown his sword through the hole and begun to widen it before he was crushed to death by the giant's club, Wally had grabbed Silverlight, and afraid of the moss giants, run back home in fear of his life with the sword in his hand. When Waldo recounts Wally's fight with Delrith, he notes that the sword shimmered in his father's hand, and that Wally dodged Delrith's attacks "as if the sword was directing his movement with a grace that never returned". However, as 'The Tales of Wally' is criticized by Reldo of being "full of exaggerations and embellishments", "unreliable", and "often wrong", the validity of the information Waldo presents about Silverlight's past cannot be confirmed.[9]

At some point after Wally's defeat of Delrith, Silverlight was placed in a crypt below the church in the North-east of Varrock, guarded by the spirits of those who had wielded Silverlight: the Spirit of the Body, the Spirit of Faith, and Spirit of the Mind.[10] Each guardian's trial is meant to demonstrate a quality the sword's user needs to have in order to be trusted with the sword: to have the strength to properly wield Silverlight and prevent it from being seized with strength,[11] to have the faith in the power of the gods to guide the sword's wielder as the sword would be powerless without faith,[12] and to be focused on one's task and understanding what lies ahead.[13]

Silverlight eventually grew famous enough to be featured in songs. By the summer of 165, songs were performed throughout Misthalin, from Lumbridge to the Wilderness border.[14]

Both Gideon Bede and Wally's descendant Sir Ehntor Prysin tried to obtain the sword, but were judged unworthy to use the sword by the three spirits.[15][16] Gideon attributes his failure to obtain the sword to being a mere academic, while the dialogue of the Spirit of the Mind in Dimension of Disaster suggests that Sir Prysin was denied access to his ancestor's sword due to the spirits deeming him a "vainglorious buffoon".[17]

When Lucien succeeding in summoning tormented demons for the first time, Movario, greatly fearful of their unnatural power, intended to seek out Silverlight in the event Lucien would set them on him, having come to the conclusion that as tormented demons seem to possess some sort of magical defence, regular weapons would only be marginally useful against them.[18] Silverlight is also referred to in the Binding book as "legendary", suggesting that the sword was famous when the book was written.[19]