The corrupt dragon spear was released on 15 October 2008, along with the PvP worlds. It is the strongest and was the only spear available to non-members at its release, followed by the spears that can be obtained during the Dungeoneering skill. It is also the most damaging weapon available to non-members. The corrupt dragon spear crumbles to dust after 30 minutes of wielding. It requires 60 Attack to wield. This spear, like all spears, attacks at the same rate as any battleaxe or two-handed sword, with a normal attack interval of 3.6 seconds.

When a player is killed with the degraded version of this weapon, coins (amount dependent on grand exchange price) are dropped instead of the spear. This is a good method to get a partial refund of the weapon's price as you cannot trade the degraded version.

Warning: Once you wield this item for 3 or more seconds, it will have the word (deg) added to its name and it becomes untradeable. Using this item in combat adds the (deg) to its name almost instantly, also rendering it untradeable.

It is more expensive than the normal version because it is the most accurate (along with other corrupt dragon weapons) and highest Damage weapon in F2P.

This spear is noticeably stronger and more accurate than the Gravite 2h sword, and is considered the deadliest weapon in Free-to-play. 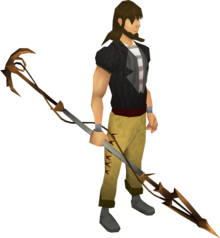