The dragon scimitar is a level 60 scimitar. It can be wielded by members who have at least 60 Attack and have completed the Master quest Monkey Madness.

It can be bought from two different shops for 100,000 coins: either from Daga's Scimitar Smithy on Ape Atoll, or from Dealga's Scimitar Emporium in the Varrock Sword Shop. Players who have freed King Awowogei in Recipe for Disaster can easily reach Ape Atoll through the Ape Atoll Teleport spell, which requires 64 Magic. It is also a possible loot from monkey knife fighters after completing Do No Evil.

Along with the Abyssal whip, it used to be one of the most popular non-degrading weapons for melee training, but both were commonly ridiculed for their weak special attacks.

An off-hand version of this scimitar can be bought for 100,000 coins from the two aforementioned shops in Ape Atoll and Varrock. 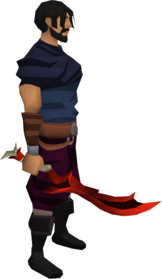 The dragon scimitar has a special attack called Sever which prevents the target from using protection prayers for 5 seconds, and deals 20-100% ability damage. The attack also has a higher chance of hitting the target. The special attack requires 55% adrenaline, which can be reduced to about 49.5% with a ring of vigour. It should be noted that the special attack will not disable monster protection prayers, and therefore is significantly less useful in PvM and training scenarios compared to other dragon weapons.