The dragon halberd is a halberd that requires level 60 Attack and completion of Regicide to wield. Like all halberds, the dragon halberd has the ability to attack from two squares away, and thus the only dragon melee weapon usable for safespotting. It can be purchased from the Quartermaster at Tyras Camp for 325,000 coins, but can be bought from the Grand Exchange or another player for a substantially lower price.

The weapon's extra square of reach and high offensive bonuses make it useful for fighting certain large monsters from safe spots. Its downsides include the quest requirement to wield it, the fact that it is a two-handed weapon (and thus cannot be wielded with a shield or off-hand weapon) and its slow attack speed.

The dragon halberd's special attack makes it a fantastic choice of weapon when fighting lots of enemies in a confined space such as the Abyss, especially when used in conjunction with other abilities such as Hurricane and Quake.

This item is not augmentable. 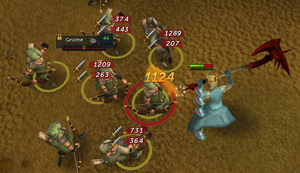 The area of the special attack's effect.

The dragon halberd has a special attack called Sweep, which swipes all the targets in front of the player (similar to Cleave, but with a larger area) twice, and the area doesn't seem to be affected by whether an opponent 1 or 2 squares away is targeted. The special attack uses 30% adrenaline and deals 45-185% damage each hit, or 90-370% total per target. Unlike before the Evolution of Combat, the size of the opponent does not matter.