The dragon battleaxe is the second strongest battleaxe that can be used outside of Daemonheim, behind the Necronium battleaxe. It can only be wielded by members who have at least 60 Attack and who have completed the Heroes' Quest. It can be bought from Happy Heroes' H'emporium in the Heroes' Guild for 200,000 coins, or as a reward from a Gold Chest in the Shades of Mort'ton minigame. However, it is advised that players buy this weapon from the Grand Exchange in Varrock or another player as prices are normally lower.

For a long time, this weapon had the highest damage rating for all nondegradable one-handed weapons. 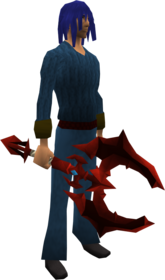 The Dragon battleaxe has a special attack called Rampage. It requires 100% adrenaline to activate. Upon activation, it drains the player's Attack, Defence, Magic, and Ranged levels by 10%, rounded down. The Strength level of the player is then boosted by 10, plus another level for every 4 levels the special attack drained. Given the nature of the calculation, the player's Strength level is not taken into consideration when calculating the overall boost.

bonus, but becomes a

bonus while the Berserk ability is active. Both the hit chance reduction and the hidden damage boost last for 60 seconds and are lost upon lobbying or death.

This means that when using the Berserk ultimate, instead of multiplying the damage by

as the ability normally would, the damage is multiplied by

. Similarly, when using the special attack from the Zaros godsword, instead of multiplying the damage by

, the damage is multiplied by

For an example of this, consider a player with level 99 Strength, with levels 50 in Attack, Magic, and Ranged, as well as level 116 in Defence:

The total Strength level boost can then be determined:

And given that in this example the player has level 99 Strength, the boosted strength level is:

In Full Manual and Revolution modes, the special attack can be performed without a target if activated by the Special Attack keybind set in the game controls or by clicking the adrenaline bar on the main action bar. On Legacy Mode, the special attack can be activated every 5 minutes without needing to gain adrenaline in combat, thus becoming a free and reusable boost to Strength that increases damage done to rocks whilst mining.