From the RuneScape Wiki, the wiki for all things RuneScape
Jump to: navigation, search
For other variants of this item, see non-corrupt.
Corrupt dragon scimitarC. dragon scimitar (deg)? (edit)? (edit)

The corrupt dragon scimitar was released on 15 October 2008 along with the PvP worlds. It is the strongest scimitar available to non-members, but it crumbles to dust after 30 minutes of wielding. It requires 60 Attack to wield.

Warning: Once you wield this item for longer than a few seconds, it will have the word (deg) added to its name and it becomes untradeable. Using this item in combat adds the (deg) to its name almost instantly, also rendering it untradeable.

The corrupt dragon scimitar does not require completion of the Monkey madness quest to wield. 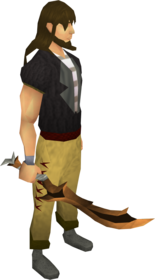