From the RuneScape Wiki, the wiki for all things RuneScape
Jump to: navigation, search
For this item's main hand variant, see lucky dragon claw.
For other variants of this item, see non-lucky.
Lucky off-hand dragon claw? (edit) 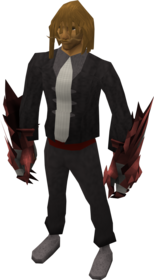