Vesta's longsword is part of Vesta's Equipment and is the fifth strongest longsword in the game, beaten only by the chaotic longsword, tetsu katana, Superior Vesta's longsword, and the drygore longsword. It is obtained by killing Revenants in the Forinthry Dungeon or the Chaos Elemental in very deep Wilderness.

The normal version requires 78 Attack and degrades for 100,000 charges of combat before disintegrating - it cannot be repaired. Additionally, using the weapon's special attack will drain 100 charges, or 0.1% of maximum charge.

A corrupt version also exists, which requires only 20 Attack and lasts only for 15 minutes of wielding (degrades even while not in combat). After the sword has been used in combat it will become untradeable. 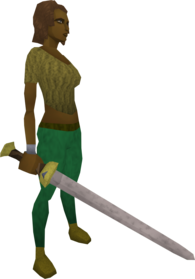 This attack has variable minimum and maximum hits; the minimum between 50%-83% and maximum 150%-217% above said minimum. Overall it can hit between 50%-300%, but because of this players are less likely to hit spectacularly high or low.

Using the special attack will take out 0.1% of the weapon's charges.