Excalibur is a member's only quest weapon, that was once and still is wielded by the legendary King Arthur. To wield this weapon, the player needs at least 30 Attack. Its stats are the same as those of a mithril longsword. It also has a special ability activated by right-clicking it while equipped, which raises the user's defence by 8 levels.

To receive an Excalibur the player must complete the Merlin's Crystal quest to a certain point. It's seen again in the Holy Grail quest.

It can be displayed in a player-owned house with 42 Construction. This weapon cannot be made using the Smithing skill.

This item is never retained upon death and players will have to return to the Lady of the Lake to get it back. She will charge 500 coins to return it.

The Lady of the Lake will turn this weapon into the Enhanced Excalibur after completing all achievements up to hard Seers' Village achievements. Players cannot mount the weapon for display in their quest hall after the enhancement. Players may receive another Excalibur for 500 coins by talking with Lady of the Lake, even if they have mounted one in their house. 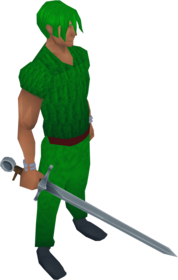