From the RuneScape Wiki, the wiki for all things RuneScape
Jump to: navigation, search
Uraeus (Apep's axe)? (edit)

Since 5 June 2017, it can also be used as a cosmetic override which is unlocked when picking up the Uraeus. 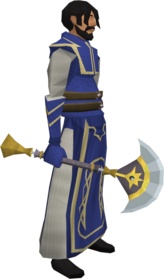