From the RuneScape Wiki, the wiki for all things RuneScape
Jump to: navigation, search
For other variants of this item, see non-lucky.
Lucky dragon 2h sword? (edit)

The lucky dragon 2h sword is a piece of lucky equipment that could previously be won from Squeal of Fortune. It has the same bonuses and special attack as the regular dragon 2h sword, but it is untradeable and has a different appearance. It was obtainable again during the Wonderbar (Purple) promotion in 2016 on Treasure Hunter and during the 2nd Chance Tuesday promotion in 2016 of the aforementioned promotion. Afterwards it became discontinued again. 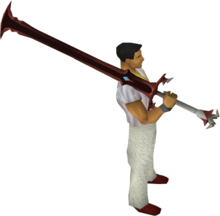 The update history project is a work-in-progress – not all updates to this topic may be covered below. See here for how to help out!
Retrieved from ‘https://runescape.wiki/w/Lucky_dragon_2h_sword?oldid=32668000’
Categories:
Hidden categories: