Vesta's spear is part of Vesta's Equipment, and is obtained by killing revenants in the Forinthry Dungeon, or killing the Chaos Elemental.

The normal version requires 78 Attack and degrades for 100,000 charges of combat before disintegrating - it cannot be repaired. Additionally, using the weapon's special attack will drain 100 charges, or 0.1% of maximum charge. If a player is made to lose a degrading Vesta's spear in the Wilderness or inside the dangerous portal at clan wars, 780,000 coins will be dropped in its place.

A corrupt version also exists, which requires only 20 Attack and lasts only for 15 minutes of wielding (degrades even while not in combat).

The Vesta's spear can be upgraded to the superior Vesta's spear using an ancient warriors' equipment patch. This upgrades it to tier 88, and makes it augmentable. 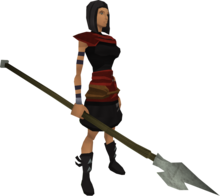 Vesta's spear has a special attack, Spear Wall, which requires 50% adrenaline. The wielder swings the spear, damaging enemies in a 3x3 grid and reflecting 50% of damage taken for 5 seconds.

Using the special attack will take out 0.1% of the weapon's charges.