The corrupt dragon longsword was released on 15 October 2008 along with the PvP worlds. It is the strongest longsword available to Free-to-play, but it crumbles to dust after 30 minutes of wielding. It requires 60 Attack to wield.

When a player is killed with a newly degraded version of this weapon, roughly half of the Grand Exchange market price is dropped instead of the longsword. It's a good method to get a partial refund of the weapon's price as you cannot trade the degraded version.

The corrupt dragon longsword does not require completion of the Lost City quest to wield.

Warning: Once you wield this item for longer than a few seconds, it will have the word (deg) added to its name and it becomes permanently untradeable until it vanishes. Using this item in combat adds the (deg) to its name almost instantly, also rendering it untradeable. 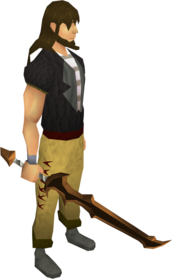