A rune scimitar is a tier 50 melee main-hand weapon. It requires level 50 Attack to wield.

It can be made at a forge and anvil using 2 rune bars, requiring 1,200 progress to complete, granting a total of 480 Smithing experience. It can be upgraded to a rune scimitar + 1 with another 2 bars. 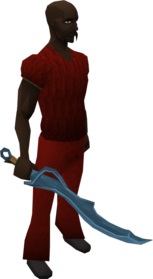