Darklight is a magic sword created from the sword Silverlight during the Shadow of the Storm quest. In that quest, Silverlight is transformed into Darklight after being dyed with black mushroom ink and then being used to destroy the demon Agrith-Naar, which coats it in ichor. Both Silverlight and Darklight can be mounted on the wall of a Quest Hall in a player's home. Darklight can be further upgraded following Dimension of Disaster using 5 silver pennies in Gypsy Aris' reward shop. Purchasing the upgrade does not directly change the look, name, or base stats of the item, but will grant additional benefits listed below.

If a player loses Darklight, it can be retrieved by talking to Gideon Bede in the church north of the Varrock museum, although reworked version of Demon Slayer may need to be started before Darklight will be offered. It can also be re-obtained at May's Quest Caravan after putting 150 quest points into the Hub Track. 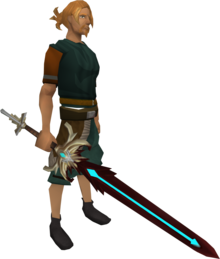 Against most monsters, Darklight is a fairly weak weapon with bonuses equal to those of a steel longsword. However, when using the sword to fight most varieties of demon, it will gain a passive effect which:

Additionally, Darklight will remove the fire shield from a tormented demon, the only other way being holy water.

After Dimension of Disaster, Darklight can be upgraded by Gypsy Aris for 5 silver pennies (via the reward shop). Should the player forget if they have previously unlocked the upgrade, they may check the reward shop to verify the "Darklight upgrade" reward shows as "Owned" (as the upgrade does not change the appearance, name, or base stats of the item).

When fighting demons, the upgraded Darklight:

The following creatures will take increased damage from Darklight:

Darklight does not affect the following:

Darklight has a special attack, known as Weaken, consuming 50% adrenaline with each use and dealing 20-100% ability damage. It reduces its target's Attack, Strength and Defence by 5% + 1. Against demons, this is more effective so stats are drained by 10% + 1.