From the RuneScape Wiki, the wiki for all things RuneScape
Jump to navigation Jump to search
The Old School RuneScape Wiki also has an article on: osrsw:Lever
This article is about the levers to teleport to and from the Wilderness. For other uses, see Lever (disambiguation).
"Wilderness lever" redirects here. For the switches for Ten-uous Link, see strange switch.
Lever? (edit) 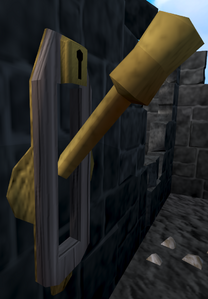 A lever can be found in either the west section of East Ardougne or south of Edgeville. Pulling them will teleport the user to the Deserted Keep, deep in the Wilderness, where another lever is located. It is used to reach the deep Wilderness for purposes such as Treasure Trails clues and access to places such as the Mage Arena, Wilderness Agility Course, and Chaos Elemental.

There is also a bank reachable from the house to the north-west of the lever, right next to the Mage Arena.

The location of the lever's destination.

This information has been compiled as part of the update history project. Some updates may not be included - see here for how to help out!
Retrieved from ‘https://runescape.wiki/w/Lever?oldid=35897742’
Categories:
Hidden categories: