The minigame's lobby is an instance shard world and located on a platform above the Crucible arena, accessed through a hatch at the eastern border of Edgeville. Based on one's level (below 81, 81-120, or 121+) and combat mode (EoC or Legacy), one may enter an ongoing battle in the arena below using the board any time, or join the queue if no battle is going on. 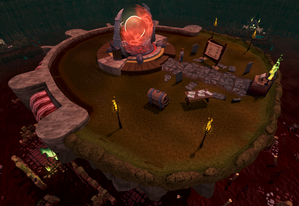 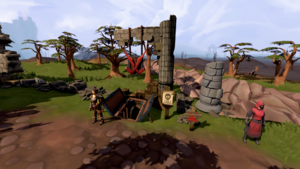 During the Deathmatch, players are teleported to an arena, and after a countdown, may attack other players. When a player dies they respawn in a bank area with a bank, a prayer altar, and supply of bandages, Deathmatch super restore flasks, and Deathmatch supreme overload salves. Players may then re-enter the arena through a crevice, which transports them to a random exit crevice with a short period of immunity. It is also possible to choose which exit the player wishes to use. Crevices may also be used to enter the bank area from which the player may leave the game at any time. No points would be awarded if a player chooses to leave the game early. 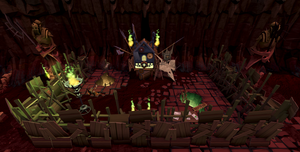 One of the banks in the area, also containing a prayer altar and supplies.

At the halftime, if there are more than 20 players in the arena, an essence of death will spawn in the area, informing all players. Being close to the essence fills up a bar visible above players' heads. The first player to fill their bar becomes the Supreme Hunter. When another player next to the essence is killed, the killer receives half of their bar. The Supreme Hunter is indicated with an icon above their head. The Supreme Hunter receives supreme weapons (Annihilation, Decimation, and Obliteration) (food or potions will be banked if the player's inventory is full) with a special attack unique to Deathmatch called Supreme Defenders. This special attack requires 100% adrenaline and summons 10 Rogue's souls to fight alongside the Supreme Hunter. Additionally, the Supreme Hunter receives 10% damage reduction for each soul that they have active. The Rogue's souls ignore the combat immunity period.

The arena contains power ups to help players in combat. These can be activated by running over them. If a power up spawns while multiple players are on it, the player on the northwestern corner will get it. Players can't grab power ups if they still have immunity. While a power up is active (besides Armour and Cabbage Time!), grabbing a new one overrides the old one. All power ups are lost when the player dies. Regular power ups spawn at set times at the same locations, have relatively short re-spawn times, and are active from the start of a game. Super power ups are more powerful but have variable and longer respawn times and are not active from the start of the game. Players are notified when a super power up spawns and when a player grabs one.

At the end of the game, players earn Deathmatch points depending on how well they fought. Points are awarded for each occurrence of the following: