From the RuneScape Wiki, the wiki for all things RuneScape
Jump to navigation Jump to search
Artefact? (edit)? (edit) 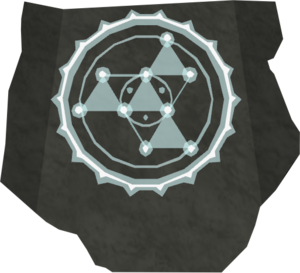 Artefacts are interactive pieces of scenery used for teleportation into the King Black Dragon's Lair, currently found in two locations: set into the Wilderness wall north of the Edgeville Monastery, and in the Lava Maze Dungeon. Activating either one teleports the player to the King Black Dragon's Lair; depending on which artefact the player uses, the teleport will behave differently. 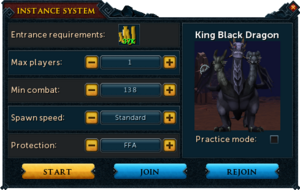 The interface to create an instance with the king black dragon

If a player enters the lair from the Lava Maze Dungeon they will be rewarded with a 10% damage boost on the King Black Dragon, showing the message "You have been awarded a 10% damage bonus against the KBD for entering via the Wilderness. This effect will reset when you exit the area." Using the Edgeville artefact will not grant the 10% damage boost.

The artefact in the lair will return the player to the artefact they used to teleport in. There are two main advantages teleporting from Edgeville: players are kept safe from PKers, and there is a bank close by.

This information has been compiled as part of the update history project. Some updates may not be included - see here for how to help out!
Retrieved from ‘https://runescape.wiki/w/Artefact_(King_Black_Dragon)?oldid=35855198’
Categories:
Hidden categories: