From the RuneScape Wiki, the wiki for all things RuneScape
Jump to: navigation, search
The Old School RuneScape Wiki also has an article on: osrsw:Warrior woman 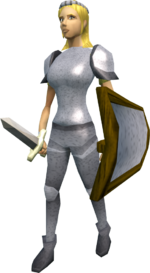 Warrior women are human female warriors found scattered across RuneScape. They are similar in level and stats to male guards, but are comparatively very rarely killed due to their drops. Warrior women are a much less crowded alternative to killing guards. There are two in East Ardougne Castle. There are some in Varrock Castle, and there are also four at a camp to the northwest of Ardougne which are almost never used. This camp also offers safe spots for ranged and mage.

They may be pickpocketed at level 25 Thieving, giving 18 coins and 26 Thieving experience (you can collect flame fragments of the Warrior type when collecting flame fragments for the Thieves' Guild), and getting hit for 20 life points if the pickpocket fails.

During the battle in Defender of Varrock, the warrior woman in the palace can be seen having barricaded herself in the corner of the room north of Clive using a table. During the battle she is not attackable.

The update history project is a work-in-progress – not all updates to this topic may be covered below. See here for how to help out!
Retrieved from ‘https://runescape.wiki/w/Warrior_woman?oldid=33825716’
Categories:
Hidden categories: