Kandarin is a wealthy kingdom, and nearly as powerful as the Kingdom of Misthalin. It gathers much of its wealth through industries in places such as Seers' Village and Yanille. It also trades with many of its bordering nations. It is even claimed that Kandarin has connections to lands far to the west where not many humans have ventured to.

Despite this, Kandarin faces many problems; in 136 of the Fifth Age the former king, King Ulthas, died in a hunting accident and by his will, his two sons, Lathas and Tyras, split the city between them. The division in leadership left the city weakened, and threats of ogres in the south increased crime in East Ardougne. Even sea trolls on the northwest coast, are causing problems for King Lathas. Even more disastrously, King Tyras has abandoned his city to a terrible plague after leaving for a crusade in the elven lands of Tirannwn. West Ardougne is now under quarantine, and many of its citizens believe King Tyras caused the plague somehow. In reality, however, this was part of a treasonous plot hatched by the vengeful Lathas, and he was subsequently deposed of in the Ardougne Revolution.

Little is known about the lands of Kandarin prior to late Fourth Age. In the First Age, the first humans, arriving from the eastern areas, settled next to River Dougne.

In the Second Age, the known inhabitants of Kandarin areas were elves, gnomes and humans. The resident elves worshipped Seren and humans followed Saradomin and Armadyl, while the gnomes were devout to Guthix. Zaros likely had no influence in ancient Kandarin. It is also known that in Second Age, there was a huge temple of "one of the Saradomin's patriots" built below the ground. The temple was abandoned for unknown reasons, but a Saradominist explorer called Valdez rediscovered it with the Staff of Armadyl hidden within. This lead to a series of events causing the fall of Zaros and the beginning of God Wars.

During the God Wars, the settlements in Kandarin were destroyed and elves retreated to Tirannwn. Gnomes were forced to live underground.

During the beginning of Fourth Age, gnomes emerged from the underground, only to find out that majority of Kandarin's human populations were barbaric tribes, some of who hunted down gnomes, forcing them to live in hidden settlements. Compared to the two other large human kingdoms, Kandarin is the most recently founded one, and it took a while for tribes to settle down.

In the late Fourth Age, modern Kandarin was mainly inhabited by elves, under the rule of King Baxtorian. In the year 1930, word reached Baxtorian of the Iorwerth Clan's treachery at Prifddinas; he abandoned his Kingdom to help the city. He saw there was no hope for Prifddinas, but when he returned, he found his Kingdom in ruins. It is said that he buried himself under Baxtorian Falls. No elves aside from the members of A.R.M.S. have dwelt east of the Arandar pass since.

Goblin migration took place somewhere in the mid-fourth age who were chased away from Feldip Hills by ogres who wanted to get rid of the goblins once and for all. A large portion of the goblins escaped but they came to conflict with gnomes. Gnomes, with the help of illusions, managed to force the goblins even further north.

At the mid to late Fourth Age, there was a major battle between the goblin tribes: Battle of Plain of Mud. At that point in time, there were few resources available to the goblins, who, having grown weaker since the end of God Wars, lacked the might to wage war on the ever-strengthening settlements of humans and gnomes. This caused the goblins to fight among themselves culminating into that major battle which took place near the modern Fishing Guild. After the battle, ended by Hopespear of the Narogoshuun's vision, a temple was built there, which sank into a mud, thus keeping its location secret to other races.

Before the ascent of the Ardignas line of kings, a ruined outpost north of modern-day Ardougne was inhabited by Zamorakian mages, who raided Ardougne, which had been established shortly after the Mahjarrat Hazeel's, who rules the area, defeat in 7 of the Fifth Age, often. This period of time, which started in the nineties of the first century, was known locally as the Dreaded Years of Tragedy. Eventually a Saradominist army left Ardougne to fight them in 98. The battle was particularly blood-thirsty, and eventually only two mages, one from each party, who had been friends at some point years before this period, were left alive. Though this is possibly a romanticism and seems improbable; it is certain, however, that there were very few survivors. The battle was known as The Great Battle.

It happened to be that these two ex-friends had separated at some point of their childhood because of an argument over religious beliefs; one supported Saradomin while the other supported Zamorak. Years later, they met again in the battle, only to find they were the only survivors, and decided not to ever argue again, both fulfilling this compromise by becoming supporters of Guthix and trying to start following his ways of balance. After the fight, one of the two friends founded the Ardougne market, where people could trade goods in equality of value, while the other became the first king of the Ardignas line.

Possibly after a few years or so since Kandarin's founding, the rule of the kingdom passed to King Narras when the first king of Ardignas died. Narras was, sadly, insane and attempted to encourage literacy among his subjects with a game he called "Hangman."[3]

After he died, Narras was succeeded by King Ulthas In the year 132, King Arthur arrived from another dimension he called Britain, along with the Knights of the Round Table. Ulthas gave them a large castle near Seers' Village called Camelot. Lord Sinclair, the previous landowner and a friend of King Ulthas, agreed to move to a smaller manor, Sinclair Mansion in the north of the Kingdom, much to the complaints of his spoiled children.

In the year 136, King Ulthas died in a hunting accident, his will being to divide his kingdom between his sons. His two sons, Lathas and Tyras, decided to split the city of Ardougne between them. King Lathas, protector of East Ardougne, was a successful man; whereas King Tyras, protector of West Ardougne, was negligent of his half of the city. In the year 168, Tyras left on a crusade to the lands beyond the Galarpos Mountains through the Underground Pass, and came back after discovering the elven lands of Tirannwn. Soon after that, he took some troops and returned to Tirannwn to help the rebel elves in their fight against the Iorwerth Clan, abandoning West Ardougne to an infamous and terrible plague brought by Tyras from Tirannwn, according to Lathas, causing the poor people of West Ardougne to hate him. Lathas hired the mourners to contain the plague of West Ardougne. West Ardougne remained in quarantine for the remainder of the Fifth Age.

This turned out to be a ruse, however, for the plague was fake, the mourners were really cruel Dark Elves of the Iorwerth Clan and Lathas secretly worked with Lord Iorwerth himself to return a Dark Lord of divine origin to the world. In return, he was promised the full rule of Ardougne as well as the eradication of King Arthur and the fall of Camelot. Citizens from both halves of Ardougne are, however, largely oblivious to this conspiracy.

In year 1 of the Sixth Age, an adventurer, along with a number of citizens of West Ardougne started a revolt, and with the support of the Ardougne City council, Knights, and Heroes of Ardougne, they fought a brief battle that resulted in the expulsion of the Mourners and the overthrow of Lathas. His fate was left to the adventurer, while Thoros (cousin to Lathas and Tyras) was made the new King of Ardougne. 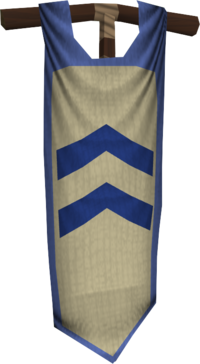 The capital city of Kandarin is Ardougne, and the current monarch is King Thoros. However, there are several other political leaders that live in the nation of Kandarin, such as King Arthur, General Khazard, and even the gnomish Kings Narnode Shareen and Bolren. Kandarin is one of the few, if not the only, human kingdom that houses more than one race and a variety of leaders. It is a definite possibility that unlike the much more fixed unitary governments of Misthalin and Asgarnia, where cities and regions are dependent of their nation and its leader, Kandarin is a more flexible and perhaps confederate kingdom, comprising semi-independent sub-nations. There is substantial evidence [source needed] to back this ideal: for example, while Ardougne and most likely Yanille, and perhaps a few other settlements such as Witchaven, are under direct control of the Kandarin government (i.e. King Lathas), the northern area of Kandarin, which include Seers' Village and Catherby, may be under a sort of provincial government of King Arthur and the knights of Camelot. The same applies for the people of General Khazard; they are a part of Kandarin, but they also function as their own sort of dependent state. Also, the Tree Gnome Stronghold and Village are often seen as more of an independent Gnome nation, which is plausible because of their difference in race and the fact that the gnomes have several monarchs of their own.

In most of Asgarnia, Saradominism is the one and only major practised religion, and Zamorakianism is stigmatised, if not outright illegal. In Kandarin, Zamorakianism is apparently legal or their policies are far less strict in comparison to Misthalin and Asgarnia's because the people of Port Khazard are Zamorakian. There are also two groups of Zamorakians near Ourania: the astrological followers of Scorpius, and the Zamorak Magical Institute, which is currently investigating the Ourania altar. There are only a few people who worship Guthix in the region, as seen during Meeting History. Most of Guthix's followers are concentrated in the Gnomish Empire's possessions in Kandarin, which may be considered an entirely different entity to that of Kandarin.